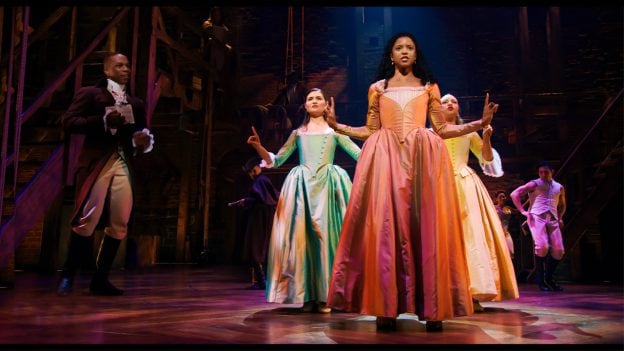 History has its eyes on one of my all-time favorite stories to ever hit the center stage. Ever since the Tony Award-Winning musical “Hamilton” found its way onto my Apple Music playlist, I’ve been singing along with Alexander Hamilton, Aaron Burr, King George and Angelica Schuyler ever since. So you can imagine my excitement when, back in 2020, Lin-Manuel Miranda announced the filmed stage performance of “Hamilton” would be available to stream on Disney+.

“Hamilton” on Disney+ is an unforgettable cinematic stage performance. The filmed version of the original Broadway production combines the best elements of live theater, film, and streaming to bring the cultural phenomenon to homes around the world. “Hamilton” takes the story of American founding father Alexander Hamilton and creates a musical theater experience unlike anything else.

With “Hamilton” on Disney+, you can sing along to some of your favorite hits from the Broadway musical. A few of my favorites include, “Alexander Hamilton,” “The Room Where It Happens,” and “Satisfied.” And yes, I know every word to each of those songs, and many more!

My friends and family are gathering around the living room this weekend to watch the performance. Streaming “Hamilton” on Disney+ is becoming a “Non-Stop” tradition this time of year, much like watching fireworks, going to the pool, and grilling hamburgers. Now I add a bit more historical hip-hop to my already “Satisfied” summer plans.

You can now stream another heartwarming story on Disney+. From National Geographic comes “America the Beautiful,” narrated by Michael B. Jordan, is the jaw-dropping story of our homeland and its amazing animals. Whatever the neighborhood, there’s a hero who can make it home. Smart, tough, brave, you name it, the animals of North America have what it takes to overcome the elements and thrive. “America the Beautiful” is an Original series you won’t want to miss.

I invite you to join me and make “Hamilton” a part of your streaming line-up at your leisure! Comment below on your favorite Hamilton song, and I bet I know every word to it!

You can experience “America the Beautiful” and the revolutionary production of “Hamilton” with a front row seat, only on Disney+!