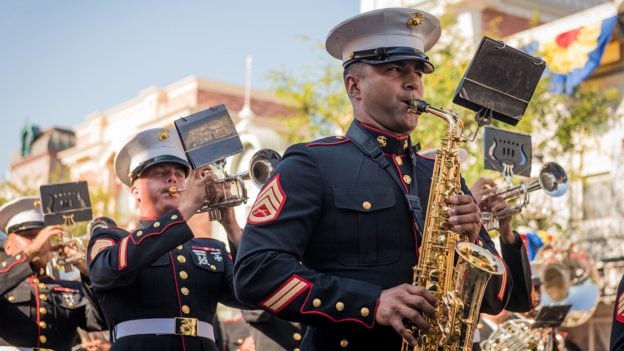 Fourth of July is a holiday for family and friends to celebrate American traditions together: barbecue, fireworks, and for some, an icon of American nostalgia: Disneyland!

The Disneyland Resort ushers in the Independence Day weekend with music from two military bands—the California Army National Guard 40th Infantry Division Band from Los Alamitos, CA and the 1st Division Marine Band from Camp Pendleton in San Diego, CA. These bands are renowned for their musical excellence and tour nationally throughout the year. Military performance groups have had a great historical presence at the Disneyland Resort beginning on July 17, 1955 when a Marine band performed for the opening ceremony. Guests visiting Disneyland and Disney California Adventure parks from July 2-4 will have the opportunity to experience their performances and enjoy a diverse mix of genres from ceremonial to jazz and rock.

But it takes another kind of band to bring these performers to the resort—a band of cast members known as guest talent coordinators. Guest Talent Manager Mitch Mocilnikar has a passion for this piece of Disney history, as he and his team played a pivotal role in building the relationship between Disneyland Resort and military bands in recent years. With many partners like those in Entertainment Operations, Mitch helped incorporate military bands into the longstanding tradition of the flag retreat ceremony at Town Square in Disneyland park on special holidays including Veterans Day and Independence Day.

“We have a great relationship with our military,” Mitch shared, emphasizing that the bands look forward to performing every year.

In a tradition Walt Disney started, the Disneyland Resort has long supported the military and even has a Business Employee Resource Group (BERG) called SALUTE, dedicated to advocating for cast members who are actively serving or have served. With recent events like “Go for Broke Spirit,” in partnership with COMPASS (the Asian American and Pacific Islander BERG), at which two Japanese WWII veterans from the 442nd Army Regiment shared their stories, SALUTE provides opportunities for cast members to become more involved with the community and learn about military history.

“Military bands have a long history of tradition, excellence and precision,” shares Marine veteran and SALUTE BERG leader, Ariel Elias. “During my time in the military, I was always in awe and felt proud that our military bands had a longstanding history since the inception of the military branches. Now, our cast members and guests will have the special opportunity to see and hear those bands that inspired us many times before.”


Overall, these bands bring entertainment and celebration to the guests, thanks to the cast members who welcome them to the Disneyland Resort in this time-honored tradition.

Theme Park reservations and valid admission for the same Park on the same day are required for Park entry. Park reservations are limited, subject to availability and not guaranteed. Entertainment, experiences, and offerings may be modified, limited in availability or unavailable, and are subject to restrictions, and change or cancellation without notice. Park admission and offerings are not guaranteed. Visit Disneyland.com/Updates for important information to know before visiting.