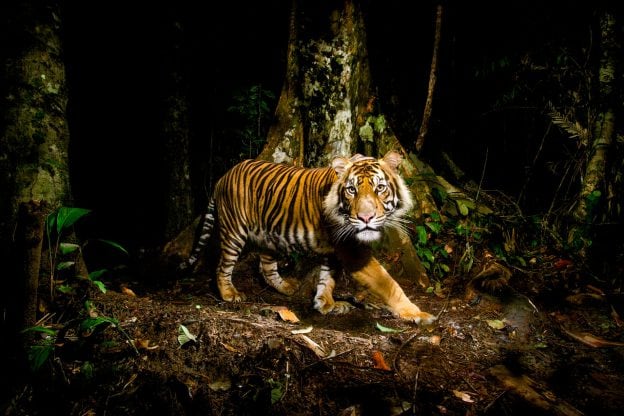 Today is World Tiger Day and we’re celebrating the largest of the big cats on the Disney Parks Blog with a special look at National Geographic Live speaker, award-winning photographer and author Steve Winter.

Steve has traveled to remote wild lands to produce awe-inspiring images of the majestic animals that roam the planet––especially big cats. Steve’s goal throughout his career has been to not only capture the beauty, intelligence and behaviors of the wildlife he photographs, but also to tell their stories. That includes the humans that impact both these animals’ lives and the ecosystems they live in, which keep our world in balance. He tries to create images that move people emotionally, bring international attention to the plight of wildlife, and ultimately, help protect his wild subjects. Today is World Tiger Day and we’re celebrating the largest of the big cats.

On assignment, Steve has been stalked by jaguars in Brazil; charged by tigers in India; and trapped in quicksand in the world’s largest tiger reserve in Myanmar. He’s worked in remote areas to document the secret behaviors of his feline subjects, trekking through punishing, leech-infested jungles of razor-sharp rattan and thick bamboo––and camping for months during a frigid winter in the Himalayas at 15,000 feet.

Growing up in Indiana, Winter dreamed of traveling the world as a photographer for National Geographic. On his seventh birthday his father gave him his first camera, and he ultimately fulfilled that dream: Steve has produced award-winning stories for National Geographic Magazine for 25 years, covering life along Myanmar’s Irrawaddy River, captive tigers in the United States, the nature of Cuba, and, of course, big cats, including snow leopards, tigers, leopards, and mountain lions. He has worked on three big cat documentaries for Nat Geo WILD and published the National Geographic book Tigers Forever: Saving the World’s Most Endangered Big Cat. His new book, “The Ultimate Book of Big Cats” comes out in September.

“I always say I didn’t choose big cats, big cats chose me,” Steve says. After shooting his first photo of an animal at the age of 34, Steve fell into his passion by mere happenstance: working on a story in Latin America on attempts to find medicinal compounds in the rainforest. The rest is history.

“As a wildlife photojournalist, I’ve also documented the scientists who study tigers and the threats that face them,” he says. That includes the pressures on forests from villagers who need to eat and farm and from illegal logging, industrial agriculture and large-scale development that together are shredding tiger habitats. “I also needed to show the conflict that arises when people and their domestic animals encroach on the tiger’s home–and how poaching for the illegal wildlife trade is now among the greatest threats.”

“Tigers are now the most endangered large cat on earth. To bring attention to their plight, I’ve tried to use the power of photography and storytelling to educate readers and spark change that will ensure their long-term survival,” Steve says.

Photographing tigers in the wild is difficult, and Steve sometimes installs remote “camera traps” on trails and places where the cats drink or mark their territory. The traps use an infrared beam system: when a tiger walks through, breaking the beam, it takes its own picture. “I always position the cameras low, wanting to photograph these magnificent animals face-to-face, at eye-level, in my composition” Steve says. “Looking into the eyes of a tiger is one of the most spectacular things you can experience.”

Most times, tigers don’t want to be found, and hopefully that is to their benefit to help sustain and grow their populations. “They’re very secretive animals,” he stated. One of the only places you can see tigers is in India. In Indonesia, if you go looking for the Sumatran tiger, you’ll never see one. “I always saw footprints, but never the animal.”

Deforestation and natural habitat loss is one of the two main issues that plague their survival, but they are doing well within some national parks and reserves. “Tigers have lost more than 95 percent of their habitats, but there is habitat where they could bounce back, with enough prey and adequate protection. If governments recognize the cultural and economic benefits from protecting nature, we can help save tigers.” In India, there are 53 tiger reserves and countless national parks that drive tourism, he noted.

“I hope with these pictures I’m able to share images we haven’t seen before, images that capture this animal’s stunning beauty and habits, and show why its existence is so precarious. I hope these pictures inspire you to act, to do something to help save it. “With every story I publish, I hope people walk away feeling more hopeful for ourselves and our planet.”