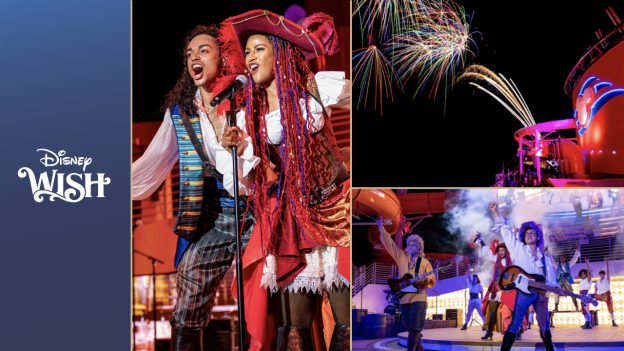 Onboard the Disney Wish: Light the Night with Spectacular Nighttime Entertainment

One of the best parts of a Disney Cruise Line vacation is discovering that the magic doesn’t end when the sun goes down! While the Disney Wish has a robust selection of world-class entertainment in every venue, it’s the exhilarating after–dark offerings on the upper decks that are a must-do on every sailing.

We are absolutely thrilled that pirate night – a fan-favorite among Disney cruisers – debuted aboard the Disney Wish with a brand-new rock-and-roll twist for Pirate’s Rockin’ Parlay Party! So be sure to dig out your favorite eyepatches and pirate garb because this is a deck party you won’t want to miss.

On one special night of every voyage, guests will make their way to the upper decks where they will be hosted by Captain Redd and her crew of swashbuckling rockstars. In addition to remarkable stunts, special effects and plenty of surprises, Captain Redd and her merry band of adventurers will perform famous rock-radio hits including a one-of-a-kind rendition of “Yo Ho (A Pirate’s Life for Me).”

And I know what you’re thinking … what’s a pirate party without a sensational show in the sky?

If you’ve never seen a dazzling Disney fireworks display in the middle of the sea, I have to tell you, it truly is a magical experience … and fireworks are included on every Disney Cruise Line sailing! Watch from the deck as fantastic fireworks light up a starry night sky, underscored by an original arrangement of the sensational soundtrack from the Walt Disney Studios “Pirates of the Caribbean” films.

With a party that’s sure to keep you rockin’ all night long and a fireworks spectacular that will take your breath away, your family is guaranteed to create unforgettable memories on the upper decks of the Disney Wish. I’ll see you there!