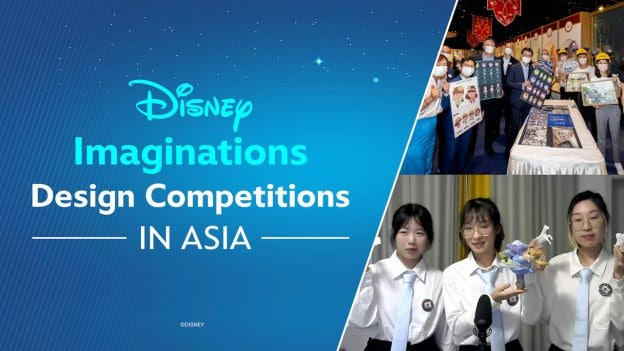 Imaginations is a design competition originally created and designed by Walt Disney Imagineering in the United States with the purpose of seeking out and nurturing the next generation of Disney’s theme park designers. It’s since grown to include separate versions sponsored by both Hong Kong Disneyland and Shanghai Disney Resort. In fact, some of the past winners have even gone on to work for the resorts themselves, and winners from Hong Kong’s competition have gone on to work for Walt Disney Imagineering Asia! Let’s take a look at this year’s competitions held in Hong Kong and Shanghai!

This year, over 300 college and university students in Hong Kong competed in the Disney Imaginations Hong Kong 2022 Design Competition. The teams took on a hypothetical challenge to test the limits of their creativity and out-of-the-box thinking. Participants were tasked with how they would both welcome and introduce the wonder and beauty of Planet Earth to intergalactic alien tourists.

As one of the most well-known youth creative competitions in Hong Kong, nine incredible teams moved forward to the next round where they joined a virtual workshop with Luc Mayrand, VP and Portfolio Creative Executive of Walt Disney Imagineering who shared his insights on design principles and presentation skills, and mentoring sessions with current creative designers from the Walt Disney Imagineering Asia team who were all past competition winners.

The winning project came from team “Wowring Street,” which consisted of students Kam Long Yin, Mak Ho Lam, Li Ka Man, and Yeung Chin Ho from The Hong Kong Polytechnic University. Their project conceptualized a terminal located in the Pacific Ocean with a high-speed rail that would connect all across the globe. The terminal was designed as an enormous theatre to showcase the beauty of Earth and a place for the arrival and departure of aliens.

Students from Shanghai and the neighboring provinces of Jiangsu and Zhejiang competed in this year’s Disney Imaginations Shanghai Design Competition, which culminated with the final competition on June 10.  As with Hong Kong, participants in the Shanghai competition were also given the hypothetical challenge of imagining how to introduce our unique and beautiful world to alien tourists. Teams were asked to pitch a compelling idea that would provide an immersive experience to a wide range of alien guests.

After many months and countless hours of hard work and preparation, five finalist teams from universities and colleges from different provinces and cities came together to participate in the virtual finale. In a special online session, five talented student teams presented their project proposals, showcasing their innovative thinking and design process through the internet to our panel of experts and invited guests—no small feat!

Despite strong competition from all finalists, Team U&U from China Academy of Art won the coveted first place award with their Project “Alkaid.” Their innovative project was based on the concept of inviting alien guests to embark on a journey to explore Earth as animals of their choice.

The winning team clinched the grand prize of a behind-the-scenes tour of Walt Disney Imagineering Shanghai, learning from some of the most creative minds in the industry, internships at Shanghai Disney Resort and a cash prize. Second place went to Team Interstellar Design Office from Donghua University, and Team J&H from Tongji University placed third. The second and third place teams’ hard work was also acknowledged — they will receive cash prizes as well as opportunities to interview for internships at Shanghai Disney Resort.

Congratulations to all of this year’s competitors and to the thousands of students who’ve joined these exciting competitions since their inception!