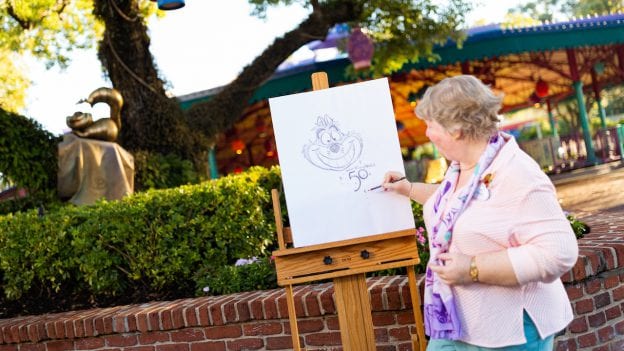 The Cheshire Cat: A Golden Grin From Ear to Ear

To be considered by many the most “wonderfully mad” character in Walt Disney’s 1951 animated classic “Alice in Wonderland” is quite an achievement, since the film is well-populated with crazy contenders. However, few would argue that the Cheshire Cat could easily disappear … and take that title with him. Happily, as a member of Disney’s Fab 50 Character Collection, this capricious kitty is not going anywhere during The World’s Most Magical Celebration! Beaming away in gleaming gold, he’s now observing 50 years of Walt Disney World enchantment from a lofty perch not far from the Mad Tea Party attraction in Fantasyland.

Early in his career, Walt Disney was interested in adapting Lewis Carroll’s famed 1865 book for the screen, and in fact, worked to do so across three decades. His efforts finally came to fruition on July 26, 1952, when the Disney version of “Alice in Wonderland” had its world premiere in London. Walt, his wife Lillian, daughters Diane and Sharon and the young English actress who had given voice to Alice, Kathryn Beaumont, were in attendance at the gala event. (The film opened in America a bit later: “Two days slow,” as the ever-tardy White Rabbit might have put it!)

As far back as the 1930s, Walt and his story team had strategized to condense Carroll’s episodic adventure into a cohesive storyline. It was soon evident that some characters needed stronger recurring roles in the narrative and the Cheshire Cat was a prime candidate. Concept illustrations by artist David Hall show the cat variously as a friendly but sharp-toothed doppelgänger of Alice’s own kitten Dinah, a wig-wearing barrister at Alice’s trial, and a free-floating face seeming to press into the air without the formality of a head or body.

During the years of World War II, the Alice project simmered in the wings as more pressing productions occupied the studio. Soon though, as features like “The Adventures of Ichabod and Mr. Toad” (1949) and “Cinderella” (1950) were made ready for theaters, the Disney story team returned to Wonderland in earnest. Still more Carrollian characters, and some original ones, were looked at for roles in the Disney adaptation. An anthropomorphic, singing “Drink Me” bottle from earlier times (meant to be voiced by Cliff “Jiminy Cricket” Edwards) was not resurrected, but the quadrille-and-soup-loving Gryphon and Mock Turtle were worked with extensively. Though eliminated from the film, the pair would have their moment later–on television, in an animated Alice-themed gelatin dessert commercial!

Another Wonderland “wallflower” was the Jabberwock, a fearsome creature described by Lewis Carroll within a backwards-printed poem in his second “Alice” book, “Through the Looking-Glass” (1871). Although the Jabberwock never made the screen, he had a song (“Beware the Jabberwock”) and a potential voice–Stan Freberg, who would find future fame as a musical satirist. The Disney Jabberwock made it out of the Tulgey Wood on one occasion, though, when Disney Legend Al Dempster included the now decidedly more benign beast in a Little Golden Book illustration.

Appearing beside the Jabberwock was a now-familiar figure, the Cheshire Cat, in final form at last. With Walt Disney’s June 1949 signing of Kathryn Beaumont as the voice of Alice, the project began to solidify and the defined characters began to “introduce themselves.” Talent from radio and motion pictures brought both speech and live-action reference motion to the cast, enabling animators to draw the personalities at last into visual life.

For the memorable role of the Cheshire Cat, Walt chose a distinctive voice which, though always carrying its signature sound, had proven remarkably well-suited to a vast array of characters. That voice belonged to actor Sterling Holloway. With tones as dry as dust yet simultaneously rich as cream, the lanky Georgia native began his career on stage, arriving in Hollywood while films were still silent. With the advent of “talkies,” Holloway’s unique sound made his stock rise higher, and soon he had as his co-stars the likes of Clark Gable, Marlene Dietrich, Bing Crosby and Charlie McCarthy. He could play any role, too: soda jerk, cow herder or even, in the 1940 Twentieth Century Fox picture “The Blue Bird,” a wild plum tree bent on making trouble for Shirley Temple! (In a nice bit of Wonderland foreshadowing, Holloway also played the Frog Footman in Paramount’s 1933 live-action “Alice in Wonderland.”)

Walt Disney soon added the versatile Mr. Holloway to his irregular stock company of players, first in “Dumbo” (1941) as the delivery stork, then as the grown-up skunk Flower in “Bambi” (1942). Narration roles were also assigned; as “Professor Holloway” he told the story of Pablo, the cold-blooded penguin in “The Three Caballeros” (1944) and accompanied the orchestrated stars of the “Peter and the Wolf” segment of “Make Mine Music” (1946).

In his role as the Cheshire Cat, Sterling Holloway excelled. His inspired performance teetered between fey charm, sly malevolence and aggressive prankishness, made all the more matchless by the animation of Disney Legends John Lounsbery, Ward Kimball and others. There was even a song for him to sing: a musical setting of Lewis Carroll’s “Jabberwocky” poem, using its nonsense words not to describe but to bewilder.

With a part such as that, it could be assumed that the Cheshire Cat would be Sterling Holloway’s crowning Disney voice role. That might have been the case had it not been for an additional plethora of performances, including revolutionary mice, hungry bears, sibilant serpents and mythic monsters. Holloway maintained a ubiquitous presence across film, television and phonograph recordings for decades, and was nominated for five Grammy Awards (winning the Best Recording for Children category in 1975).

In 1985, Holloway was awarded the Winsor McKay Award for lifetime achievement by the International Animated Film Society (ASIFA-Hollywood), and in 1991, was named a Disney Legend. During the formal handprint ceremony at the Walt Disney Studios, the typically modest Holloway chose not to discuss his own career, but instead charmingly thanked his fellow inductee, Julie Andrews, for being part of such a special day!

It’s that kind of playful spirit that kept all of Sterling Holloway’s fans grinning like Cheshire Cats across his happy half-century of Disney performances, and the grins will keep coming. New generations are discovering both Holloway’s work, and that of those who are following in his footsteps like voice actor Max Mittelman, whose energetic and youthful take on the Cheshire Cat gives the Disney Television Animation series “Alice’s Wonderland Bakery” a spirited sense of nonsense.

The next time you visit Walt Disney World, The Most Magical Place on Earth, treat yourself to a Wonderland of refreshment at Fantasyland’s Cheshire Café where, in sight of the grinning cat (on the sign) and his nearby golden counterpart, you can toast the most memorably, magically manic feline in Disney history … along with the creative wonder-workers that made him that way.