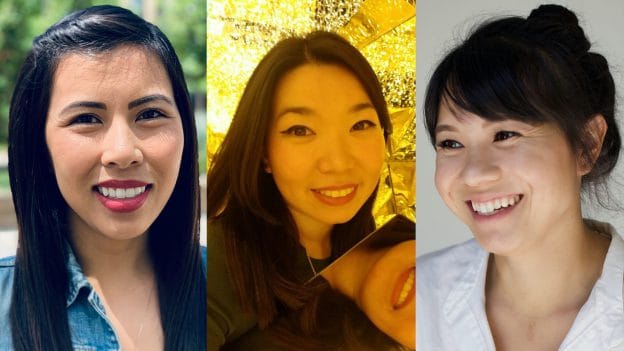 We are always proud to share the work of our brilliant team members — and when their personal stories and their work intersect, there is a powerful dynamic that makes their contribution that much more special. Today we are excited to share the stories of three talented cast members who worked on Disney and Pixar’s “Turning Red” product line: Nontra Null, Diana Tran and Kim Kha.

Nontra Null is the Senior Manager, Product Design over PiPPA (Princess, Pixar, Parks, and Animation) apparel for Disney Stores, shopDisney, and Disney Parks. She is excited to see a consistent growth of representation of Asian characters within Disney and is proud of her Thai heritage — although that wasn’t always the case growing up and trying to fit in. “From Moana, to Raya, to Meilin Lee, to Shang Chi… it’s so exciting to see characters that look like me in mainstream media. I hope continuing down this path helps other children, of all backgrounds, feel like they are seen and truly belong.”

Nontra knew immediately that she would love “Turning Red” given her personal parallels with the protagonist, Meilin. “I was also a teenager in the early 2000s, grew up in a strict-yet-loving Asian household with high expectations, and was beyond obsessed with boy bands. I didn’t anticipate being as hooked on 4-Town as I am.” The product direction was a refresh of the trends that she grew up with, noting it was like designing for her younger self and tapping into the things she loved as a teen.

Nontra’s team worked on both youth and adult products, although many of the items and accessories span all ages. As an avid ear headband collector, merging both human Mei and red panda Mei to create the Turning Red Ear Headband was a dream.

Most recently, Nontra was part of the team that designed the Ultimate Princess Celebration Moana Designer Doll, where she drew inspiration from her grandmother. “She was the first in our family to move from Thailand to the United States of America,” Nontra explained. “The doll pays tribute to my relationship with her, which is mentioned on the box.”

“After 13 years at Disney, I’m thrilled that I get to put Asian female leads at the forefront of our products — the 7-year-old me would be so proud!”

Diana was very excited from the get-go of the opportunity to work on a Pixar property, and after watching “Turning Red,” felt honored to have worked on the design guide for a film she could personally relate to. “I loved it not just because it’s super cute and relatable with the boy band era I grew up in, but because I was raised in a similar environment with very loving and overbearing yet strict parents.” Diana identified with a lot of Mei’s struggles, including the dynamics of the relationship she has with her parents and the importance of her friendships. “At the end of the day, I remind myself that what they do for us is coming from a good place and all out of love. And Mei and I are very lucky to have that kind of support.”

Of all the pieces she worked on for the “Turning Red” product line, Diana’s favorite was a badge that she created with her director at the time, Eric Tan. It features Mei as a cute graphic red panda with the editorial line: “I Got This.”

Diana is currently part of the team working on designs for the upcoming live-action “The Little Mermaid” film releasing next May, along with other exciting projects. “Every season we start with new ideas and it’s always a fun challenge to try to push each property a bit further from our last season to keep it fresh,” she stated. “I really enjoy the process and get inspired each time.

Kim Kha is an Associate Character Art Manager who has worked on a variety of existing Disney properties and new films from Pixar to Disney Channel. She creates character art for style guides and works closely with the film team to ensure the art reflects the films properly. In addition to “Turning Red,” Kim has also worked on “Luca,” “Raya and the Last Dragon,” and the upcoming Disney and Pixar film “Elemental.”

Kim, who was born and raised in the Philippines, had loved working on the “Turning Red” product line, noting “my dad is Chinese and my mom is Filipino-Chinese. I felt a parallel between Mei and myself which allowed me to bring so much more to this project.” After watching the film, Kim felt an even greater connection with “Turning Red,” as it felt like watching her childhood on the big screen.

“Being a first-generation immigrant, I struggled with my Asian upbringing, culture and what was expected of me. It was nice to see that I wasn’t alone and that it’s possible to balance being a good daughter while following my dreams.”

Kim’s favorite character to work on was the Mei Panda. Not only was the character super cute, but she had more creative freedom to design poses and expressions outside of the common smiling pose her team tends to create for most characters. “Mei being a teenager allowed me to create poses with angry, sad and giddy emotions. I was also super excited to draw and render 4Town.”

Growing up, Kim loved to draw and dreamt of becoming an artist. At the time, the art schools in the Philippines only offered Fine Arts programs, none that could prepare her to work in animation or the entertainment industry. She took two years of Computer Programming classes before deciding to come to the U.S. to study Illustration. After graduating in 2010, she landed a six-month internship at Disney working on consumer products. “It was a wonderful experience, getting to work with our very talented and amazing team. In 2012, when a full-time position opened, I applied and here I am today.”

Continue to check out the Disney Parks Blog for stories about our diverse cast throughout the year!