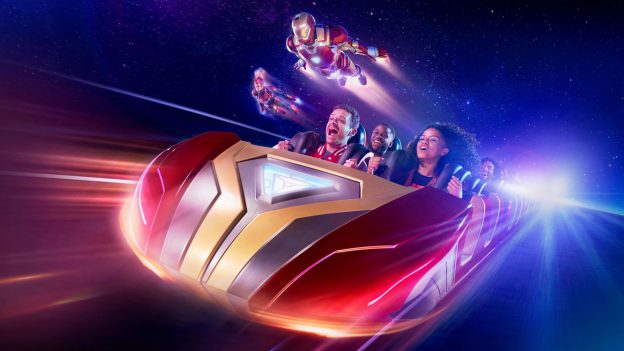 It’s National Roller Coaster Day! And what better way to celebrate this day than by looking at some of the most unique and thrilling attractions at Disneyland Paris? From twists and turns to big drops and high speed, Disneyland Paris has some epic, big-thrill adventures!

A whirlpool adventure awaits on Crush’s Coaster as you dive into the deep blue and get swept away by the East Australian Current. Hop onboard a turtle shell and begin an incredible journey through memorable movie moments from Disney Pixar’s Finding Nemo. From the beautiful scenery of Sydney Harbour to the depths of the ocean, prepare for a totally awesome ride as a few familiar faces greet you along the way. Crush’s Coaster is definitely a favorite among guests visiting Walt Disney Studios Park!

An expedition awaits on Indiana Jones and the Temple of Peril

Indiana Jones and the Temple of Peril calls out for adventure seekers looking for an expedition like no other. Meandering through the dark twists and mysterious turns of the jungle ruins, discover a deserted base camp left by earlier explorers. But will you find them? Jump on board a runaway wagon before picking up speed to explore the Temple of Peril in search of the missing explorers. Featuring big drops and quick turns, this ride makes the Disney history books for being the first ever Disney attraction to feature an inversion!

An epic takeover of the classic Space Mountain attraction that we all know and love, Star Wars Hyperspace Mountain offers even more thrill-seeking moments. Perfect for those looking for an adrenaline – fueled ride, the track is made of three exhilarating inversions, known as, a sidewinder loop, a spin and a horseshoe! The fully immersive experience catapults you straight into the Star Wars action which takes place during the Battle of Jakku, the final confrontation between the New Republic and the last members of the Galactic Empire. The fast-paced attraction is even complete with incredible music composed by John Williams, the composer of the original Star Wars soundtrack!

Jump aboard the runaway mine train in Big Thunder Mountain

At Disneyland Paris, Big Thunder Mountain is located on its very own island surrounded by the Rivers of the Far West. It also spans about five acres, making it one of the resort’s largest attractions! The attraction climbs to steep heights and drops below raging waterfalls, speeding through the mysterious mine with you onboard a rattling mine cart. But one thing that does remain the same…it is still the wildest ride in the wilderness.

Disneyland Paris recently celebrated the opening of Marvel Avengers Campus at Walt Disney Studios Park and The Avengers are looking to team up with new recruits to join them on the mightiest of missions.

In Avengers Assemble: Flight Force, Iron Man and Captain Marvel are counting on recruits to assist them in saving the world from an intergalactic threat. This thrilling roller coaster features a high-speed launch of 0-60mph in just 3 seconds, three rollover loops, two inversions and one corkscrew!

The ride also features the very first Avenger Audio-Animatronic in a Disney park with Iron Man greeting recruits before the ride, alongside Brie Larson on-screen returning to her role as Captain Marvel.

From brand-new roller coasters to fan favorites with a twist, there are many great attractions at Disneyland Paris. Have you had the chance to experience these unique roller coasters?