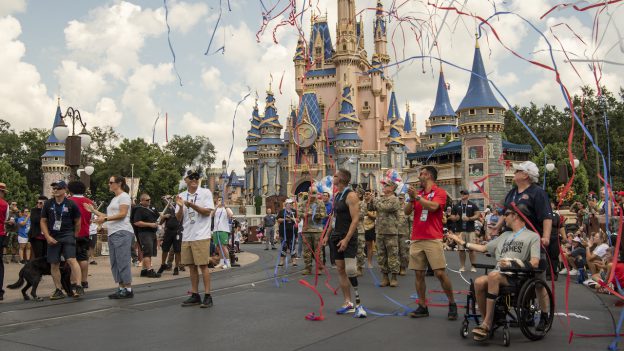 Let the Warrior Games begin! This week, we are honored to welcome athletes and their families to Walt Disney World Resort for the 2022 Department of Defense Warrior Games. This annual event celebrates the resiliency and dedication of wounded, ill and injured active-duty and veteran U.S. and allied military service members.

Their Heroes Welcome began Thursday, as athletes from the five U.S. military teams, Team Canada and Team Ukraine were celebrated as honorary grand marshals in a parade down Main Street U.S.A., at Magic Kingdom Park.

Each athlete took a turn carrying the Warrior Games Torch as their family members, guests and Disney cast members cheered them on. Speaking of cast members, members from the Disney SALUTE and Enabled Business Employee Resource Groups walked alongside the athletes in support, showing just how excited the Disney team is for the Games!

Later that afternoon, five U.S. Warrior Games athletes were each presented with the American Flag in an extra-special Flag Retreat ceremony in Town Square. A long-standing tradition at both Magic Kingdom Park and Disneyland Park, the flag retreat is one way Disney shows our commitment to all active-duty military and veterans every day.

It was a moving ceremony and the perfect way to show our gratitude for all these brave men and women have done for their country.

And this is just the beginning! Hundreds of elite athletes from across the United States Armed Forces and allied nations will be competing at ESPN Wide World of Sports Complex in sports including wheelchair basketball, sitting volleyball and indoor rowing.

Competition events, which are free and open to the public, will take place daily at ESPN Wide World of Sports Complex, through Aug. 28. Find more details on these events and the Closing Ceremonies at DoDWarriorGames.com. And stay turned to the Disney Parks Blog for more highlights throughout the event.