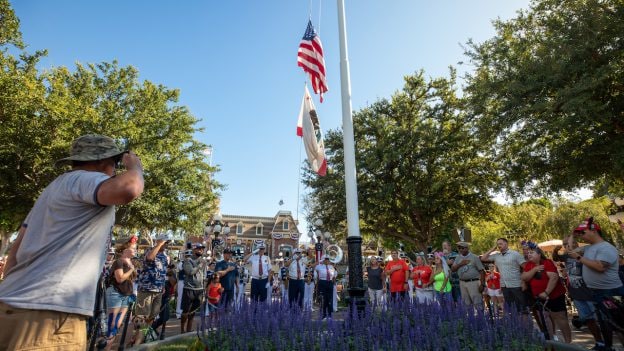 The Flag Retreat Ceremony in Town Square at Disneyland park is a long-standing daily tradition to honor those who have served in the U.S. Armed Forces. Earlier this week, a special ceremony was held to recognize the family of the late Lance Cpl. Dylan Ryan Merola, who was killed in action along with 12 other service members during the evacuation of Afghanistan one year ago.

Just before the ceremony began, a special announcement rang out:

“Today’s ceremony is a special dedication to a courageous United States Marine who gave his life last August while protecting the security of others at Kabul International Airport in Afghanistan. His valor and ultimate sacrifice is recognized today with the Navy Achievement Medal. Join us as we salute his family and remember Marine Corps Lance Cpl. Dylan R. Merola.”

In attendance were Cpl. Merola’s mother, Cheryl Rex, his grandparents, sister, and brother Brandon, who days earlier graduated from the Marine Corps Boot Camp. Cpl. Merola grew up locally in Rancho Cucamonga and often visited the Disneyland Resort with his family. “It meant so much to me to honor my son,” Ms. Rex said. “Growing up, we attended a lot of things at Disneyland, and it’s very meaningful here. It’s a special place to us.”

Cpl. Merola’s family stood side-by-side as he was posthumously presented with the Navy Achievement Medal by Marine Master Sgt. Patrick Hause. This medal commemorates heroic actions that those serving in the armed forces demonstrate in specific situations. “Receiving Dylan’s medal is very heartbreaking,” said Ms. Rex. “It’s hard knowing that I’m receiving it and not him.”

As Ms. Rex and her family proudly honored their fallen hero, they shared their immense respect to the cast at the Disneyland Resort for this moment. “To be out here with the Flag Retreat Ceremony was beautiful and amazing,” she said. “It’s always more amazing to have my family with me.”

“Every cast member at the Disneyland Resort that’s involved with veterans, friends and families of veterans, and event planning and operations knew that today was going to be special and put forth their best effort to really give the family what they deserve,” he said. “I was a Marine myself in Afghanistan and this moment is something that I could really [relate and] feel to the core of who I am.” Ariel served in the military for 21 years before beginning his career at the Disneyland Resort.

Wellness Operations & Support Manager and SALUTE BERG member Liz Dunn, pictured on the far right, also helped plan the ceremony. “We forget how precious life is and these moments where we can stop and reflect are so important,” said Liz. “This is a special place for Dylan’s family, and it’s an honor to be a part of it.”

Several members of Liz’s family are service members and she carries that pride and respect with her every day. “The armed forces is very much a part of my life, and I remember when my brother went to Iraq, I had all these feelings of fear, pride, gratitude and honor, and all those kinds of things wrapped up to one when my brother came home,” said Liz. “And Dylan’s family had that moment of seeing him off, and when they didn’t get to experience him returning home in the way they were hoping [is heartbreaking]. Having the Flag Retreat Ceremony dedicated to Dylan is a beautiful way of honoring his whole family and all their sacrifices.”