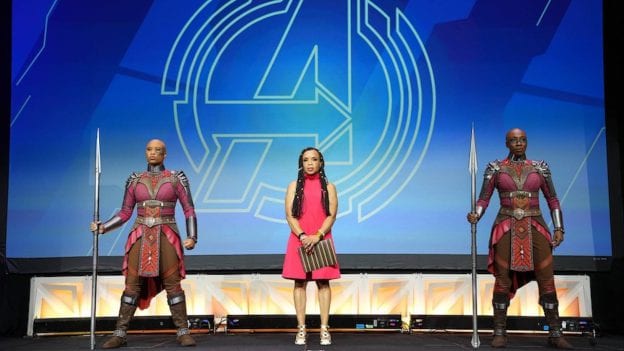 Diverse Voices Unify As ‘One Disney’ at NABJ-NAHJ Convention

It was an exciting and historic night at the 2022 National Association of Black Journalists and National Association of Hispanic Journalists (NABJ-NAHJ) Convention and Career Fair earlier this month. After two years of virtual conferences, the two organizations reunited in-person! Also, for the first time ever a number of Disney businesses teamed up under The Walt Disney Company banner to jointly participate as a Titanium-level sponsor of this year’s conference.

During the opening ceremony, ABC News President Kim Godwin was escorted on stage by the fierce warriors of Dora Milaje – Black Panther’s loyal bodyguards – to much of the conference attendees’ surprise and joy! Godwin captivated the audience with her remarks about her career journey and her inspiring words of encouragement to never stop chasing your dreams. Disney Cruise Line Public Relations Manager and former NAHJ board member Paula Machado brought greetings and introduced Vice President of Communications & Public Affairs of Disney Signature Experiences Yolanda Cade who gave an enthusiastic preview of the exciting line-up of interactive Disney entertainment on tap for that evening.

Drum Major Mickey Mouse and his mighty drum majors stole the show when they made a surprise appearance on stage alongside Outreach and Engagement Director Dayna Lee. The surprise was a special demonstration of Disney on the Yard’s initiative to expand HBCU representation at Disney! Also another historic first – more than 150 cast members took to the stage for a special “One Disney” celebration and all wore Disney red! What an amazing moment!

Following the opening ceremony, conference attendees flooded the welcome reception event sponsored by Disney Parks, Experiences and Products where the magic of Disney came to life! There was a feel-good energy in the air as the guests enjoyed yummy bites and signature drinks, jammed to music spun by a DJ, and were super excited as they took photos and interacted with a host of Disney Characters. Drum Major Mickey Mouse was there, of course, along with Captain Minnie Mouse, straight from her inaugural sailing on the Disney Wish. Guests at the event also got to spend some magical time visiting with Mirabel from “Encanto” and experiencing heroic encounters with multiverse traveler America Chavez, Star-Lord and Gamora of the Guardians of the Galaxy, and legendary Wakandan warriors, the Dora Milaje.

It all was truly a memorable “One Disney” experience!