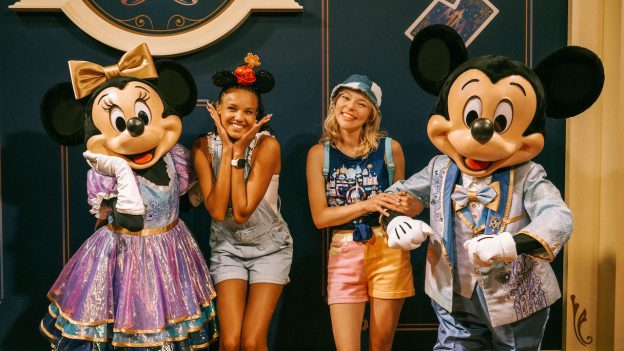 Ashley Nicole Williams and Taylor Hickson from Freeform’s “Motherland: Fort Salem” recently took a break from creating magic of their own as witches in the show, to enjoy the magic of the Walt Disney World Resort. The two are certainly no strangers to the most magical place on earth, as they have both been to the resort for birthday and family celebrations. This time, however, was their first time coming together and they celebrated something new: the third and final season of “Motherland: Fort Salem,” and the power of friendship.

The celebration was a power-packed two days where Ashley and Taylor visited all four parks! The festivities started in Disney’s Hollywood Studios with a stop through Star Wars: Galaxy’s Edge. After a fun visit on Batuu, the ladies paused to play in Toy Story Land and took a ride on Slinky Dog Dash.

After Disney’s Hollywood Studios, it was off to EPCOT where they hopped aboard Remy’s Ratatouille Adventure. Following Remy through the kitchen stirred up an appetite so the stars tasted their way through the EPCOT International Food and Wine Festival, open now through November 19, 2022. Marketplaces in France and Germany were among their favorites and they grabbed an Apple Strudel and enjoyed the sweet treat while they watched Harmonious. After traveling around the world through the EPCOT International Food and Wine Festival, they took it to the next level with an intergalactic mission on the all new Guardians of the Galaxy: Cosmic Rewind attraction!

For the festivities on day two, the fun began at Disney’s Animal Kingdom Theme Park where Ashley and Taylor took to the skies on Avatar Flight Of Passage. After time in the land of Pandora, the two paused for a photo in front of the Tree of Life with their 50th Anniversary Mickey Premium Ice Cream Bars and then it was off to Magic Kingdom.

Just like their characters in the show, Ashley and Taylor love thrills so they took on the mountain challenge and checked off Space Mountain, Big Thunder Mountain Railroad, and Expedition Everest—Legend of the Forbidden Mountain. The only thing better than a mountain you can ride, is one you can eat, so they finished the day with a mountain of ice cream! The friendship celebration even included the opportunity to meet two very special friends: Mickey and Minnie Mouse!

The two days were an incredible experience for Ashley and Taylor and their families. Though the show is in its final season, the memories made between these two stars and friends will last a lifetime.

Be sure to check out the final season of “Motherland: Fort Salem” Tuesdays on Freeform and streaming on HULU!