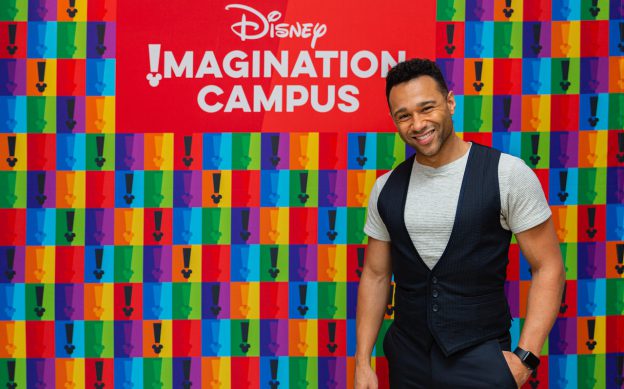 WHAT TIME IS IT? Time for Corbin Bleu to make a surprise appearance at Walt Disney World Resort!

Corbin, known for starring in the original High School Musical franchise as Chad Danforth, now stars in the newest season of “High School Musical: The Musical: The Series.” In this season, the Wildcats head to Camp Shallow Lake, a California sleepaway camp, where they and their fellow campers are primed for an unforgettable summer.

Corbin’s character is capturing a drama-filled “docu-series” of the cast’s summer production of “Frozen,” and just like the cast in the series, students from Evans High School got to learn a routine from “Frozen” during a workshop hosted at Walt Disney World by Disney Imagination Campus.

Students from Maynard Evans High School in Orlando met the 2022-2023 Walt Disney World Ambassadors, Ali Manion and Raevon Redding, who shared how their own experiences in theatre prepared them for life and for their current roles as Walt Disney World cast members.

The Ambassadors then told the students Corbin Bleu asked if he could speak with the workshop attendees via FaceTime. Excitement was high and anticipation built as they waited for Corbin to answer the call.

But they certainly weren’t expecting Corbin to appear in person! Watch how the surprise unfolded.

Answering questions from the Ambassador Team and students, Corbin recalled his experiences working with the new cast in “High School Musical: The Musical: The Series” and how the performing arts has taught him invaluable skills in life that he carries with him to this day.

Disney Imagination Campus encourages students to use their imagination and creativity to express themselves in everything they do, whether that’s in the performing arts, academics or anything else they aspire to do. Their workshops give every student, regardless of the areas they are passionate about, tools to express themselves creatively and while also preparing them for real-world challenges.

Just like the High School Musical franchise, Disney Imagination Campus hopes to inspire every student to express themselves in everything they do and stay true to who they are.