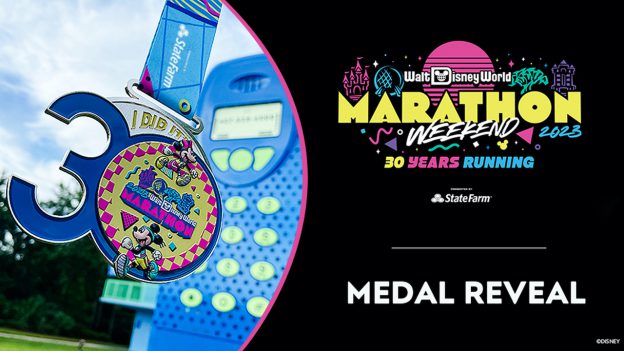 Get ready to lace up those (not-so high-top) sneakers and prepare for a totally rad runDisney race weekend as we throw it back for the 2023 Walt Disney World Marathon Weekend presented by State Farm! It’s a four-park running celebration that’s been 30 years in the making and we invite you to join us for a weekend with a dose of 90’s retro vibes, iconic characters and a glimpse into the runDisney of years past.

Featuring our largest race weekend of the season, with six races and three challenges hosted by some of our Fab Five friends and Dopey, participants will look forward to lots of fun and excitement and of course, MEDALS. This year’s medals commemorate 30 years of runDisney with colorful designs paying homage to the decade this race weekend got its start. Get a first look at what will be awaiting runners at the finish line:

Starting the race weekend off on the right paw, Pluto joins runners for a ‘paws’itvely exciting event for the Walt Disney World 5K. Runners will be keepin’ things cool on a 3.1-mile course that’s perfect for the entire family to enjoy.

Watch out for double trouble as Chip ‘n’ Dale make their way for the Walt Disney World 10K. Miss out on an exciting 6.2-mile course through the theme parks? AS IF!

Why you oughta … gear up for the Walt Disney World Half Marathon with this year’s race highlighting our fine feathered friends, Donald and Daisy Duck. Join these two on a rad 13.1-mile course and bounce to the finish line.

Goofy Race and a Half Challenge

Up for a challenge? Runners taking on both the Walt Disney World Half and Full Marathons in a 39.3-mile adventure can do so along with everyone’s pal Goofy during the Goofy Race and a Half Challenge.

What’s the 4-1-1 on running all four races? The Dopey Challenge, of course. Finish all four race events for a total of 48.6 miles and earn some serious bling!

For those wanting to add a little character to their at-home miles, join us virtually and run on a course of your choosing! Whether you take to your favorite local trail, jog around your neighborhood or even run on a treadmill for 3.1 to 48.6 miles, you’ll be part of the magic. Learn more about Virtual Walt Disney World Marathon Weekend events here.