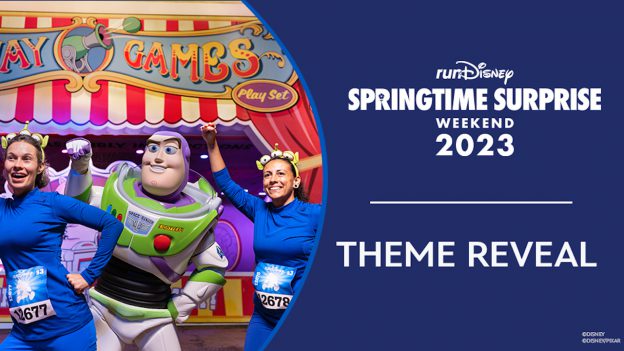 Get ready to reach for the sky and grab your rootinest, tootinest crew! We’re not toying around as the runDisney Springtime Surprise Weekend returns to Walt Disney World Resort for its second year, April 13-16, 2023. The final event in the 2022-2023 runDisney race season celebrates the power of friendship and the magic of Pixar with the Pixar Pals. Racers are encouraged to celebrate the running buddies that keep them going, the support systems that cheer from the sidelines, and the iconic characters that lift each other up time and time again.

You are SPEED. Whether you’re aiming for a leisurely jog or a personal record, get ready to speed through the lanes of this 3.1 mile course with Lightning McQueen, Mater, and all their friends.

It’s time to get those scary feet ready! Canisters at each mile marker get fuller and fuller as racers take a step in the ‘fright’ direction through a 6.2 mile course with Mike, Sulley, and all their friends from the world of Monstropolis.

Saddle up for a 10-mile event! Racers set out on the adventure of a lifetime with Buzz, Woody, Bo Peep, and more, as they push themselves to infinity and … the finish line!

Just keep running … just keep running! Racers with the perseverance to complete all three weekend events are awarded for finishing the runDisney Springtime Surprise Challenge, complete with a medal featuring Nemo and his friends from all over the big blue world.

Not able to join us at Walt Disney World Resort in April? Join us virtually and run on a course of your choosing! From 3.1 to 19.3 miles, add a little character to your at-home race adventure. Learn more about Virtual runDisney Springtime Surprise Weekend events here.

Runners wanting to join this year’s event should mark their calendars for the following registration dates and times:

Get ready to celebrate the magic of Pixar along with some of your favorite Disney Pixar Pals during the 2023 runDisney Springtime Surprise Weekend! Which race theme are you most excited about? Share with us on social using #SpringtimeSurprise.