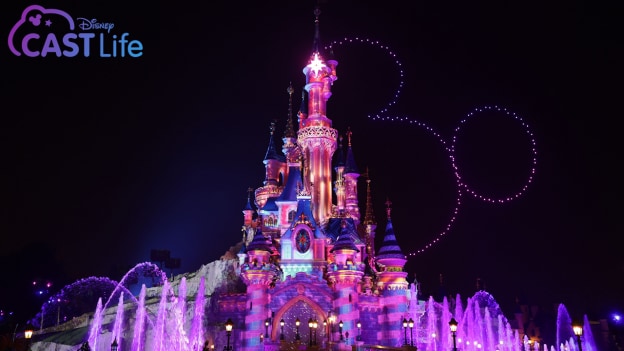 While being a cast member at Disneyland Paris means being a magic maker for guests, it also means having the opportunity to take part in events and activities designed just for us. In honor of the first Cast Life Day – a global celebration recognizing our cast, crew, Imagineers and employees and the dedication they bring to their role every day – let’s look back at the top ten highlights for cast in 2022.

Last November, cast members chose the new nametags they would wear during the 30th Anniversary celebrations. Votes were cast for the gold version and the nametag was distributed for the launch of the festivities in March.

In February, cast members were the first to get a glimpse of our 30th Anniversary experiences and products in person. Through an immersive showroom, merchandise, food and entertainment offerings were on display before the amazed eyes of cast, who were able to share their first impressions during the event. Mickey and Friends also revealed their new iridescent costumes during a unique preview of the “Dream… and Shine Brighter!” show.

Right after the press launch, cast members were invited to enjoy the 30th Anniversary experience in Disneyland Park during two special evenings. In addition to sampling delicacies, admiring the “Dream… and Shine Brighter!” show at night and meeting characters in their festive costumes, cast members were able to admire a unique moment during which they were projected onto Sleeping Beauty Castle. Just magical!

Disneyland Paris chose to celebrate and revisit the achievements of women throughout history by offering conferences and workshops reserved for cast members. The icing on the cake was an exclusive exhibition on the career of Minnie Mouse through her most beautiful and iconic outfits!

More than 2,000 cast members gathered on Main Street, U.S.A. to welcome our guests in a festive, smile-filled line of honor. More than 40 Disney VoluntEARS also spent the day alongside 270 underprivileged youth from France and Belgium invited to celebrate our anniversary. On this special day, the backstage area was decorated inspired by Disneyland Paris’ 30th Anniversary while a festive menu was offered in our company restaurants (more than 9,200 meals served in one day!). Cast members were also surprised to receive a box full of gifts specially designed for them as well as tickets to our Disney Parks. At the same time, a cast member exclusive merchandise line was on sale.

The opening of a brand-new area in our parks is a major event, and cast members were able to discover the first details of Avengers Campus during an exclusive show. Inspired by Comic-Con conventions, cast members were invited to come in their best cosplays and Marvel bounds in the colors of their favorite Super Heroes and were able to listen to panels on the Avengers Campus experiences in an epic atmosphere!

This year, with the return of Disneyland Paris Pride to Walt Disney Studios Park, guests and cast members came together for an unforgettable night with live performances by MIKA, Bilal Hassani and Becky Hill. Cast members were able to take part in the return of Disney’s Colorful Pride Parade, as well as memorable moments with Disney characters and access a selection of attractions. Cast members were also invited to Disneyland Paris Pride: The Cast Event, an exclusive day of inspirational talks where Disney teams from around the world shared their experiences and vision for the future.

As part of International Yoga Day, cast members met for an exceptional session in front of Sleeping Beauty Castle. Welcome to all, whether you were a yoga enthusiast or a beginner, the session was led by a renowned yogi and even began with sweet tunes from Kanoa, Ambassador of Aulani, a Disney Resort & Spa, who visited us for the occasion with his ukulele.

9. The Return of the Cast Member Party

The exceptional summer party reserved for cast members was held on June 30, themed to the 90s, and ended in a climax with an awesome DJ Party and fireworks show. Animations, concerts, graffiti artists and several thousands of cast members came to live this unique moment and discover the surprises and talented guests like Larusso, Worlds Apart and Corona.

Before the official opening, cast members enjoyed various epic #DisneyCastLife moments around Avengers Campus! They were the first to experience the Walt Disney Studios Park expansion and share these moments with their loved ones.

During the press event, actress Brie Larson surprised campus personnel during a unique moment. The teams that collaborated and worked on the project gathered for an iconic and epic photo with the Marvel Super Heroes. On July 20, the Campus’ first recruits were welcomed by an epic guard of honor, with the Chairman of Disney Parks, Experiences and Products Josh D’Amaro in attendance!

Throughout the day, themed decorations in the buildings, dessert and an exclusive cast member badge were offered for everyone to celebrate the opening of the Campus behind the scenes. Cast were even able to take selfies and pose in a brand-new cast selfie spot where they got to battle the Spider-Bots escaping from the Spider-Man W.E.B. Adventure attraction!

Our cast moments are one-of-a-kind, but we wouldn’t have them if it weren’t for the cast themselves. So, let’s give a round of applause to all our cast members at Disneyland Paris. We appreciate you! For more #DisneyCastLife moments and celebrations of #CastLifeDay, be sure to follow the Disneyland Paris Ambassadors on social.

Want to join the fun? Apply and become a cast member at Disneyland Paris today!