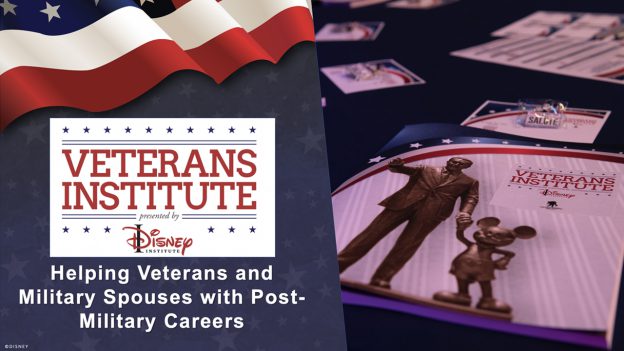 For the first time in nearly a decade, Disney’s Veterans Institute Summit presented by Disney Institute and Wounded Warrior Project returned to the Most Magical Place on Earth! It was a star-spangled event that heralded our country’s service members and veterans and challenged organizations and individuals to determine “what’s next” as they seek to champion effective veteran and military spouse hiring, training, and support programs of their own.

The complimentary event, which originally began in 2013, featured two days of highly engaging content and conversations at the ESPN Wide World of Sports Complex at Walt Disney World Resort. The summit featured a robust schedule with nearly three dozen speakers, representing U.S. government, public, private and non-profit sectors who shared their insights and advice on effective veteran support programs with the in-person and online audience.

The Summit included Disney executives, veterans service organizations and veterans and military spouses who shared firsthand stories about their transition to the civilian workforce, and best practices from organizations that have created their own successful programs delivered through keynote presentations, panel discussions, and Disney Institute content.

An inspiring opening ceremony set the precedent for what was to come on August 19th and 20th, with our very own Voices of Liberty singing The Star-Spangled Banner. The U.S. Special Operations Command Color Guard showcased the Presentation of Colors.

“We’re proud of the veterans and military spouses who work here at Disney and the powerful impact they make across our company, our teams and our guest experience,” said Josh D’Amaro, Chairman, Disney Parks, Experiences and Products.

“Those who have served in the military have a strong sense of mission, purpose and culture that makes them valuable employees as they transition to their civilian lives,” said U.S. Army General Paul Funk II, Commanding General, United States Army Training and Doctrine Command. “I am happy to see organizations like Disney supporting so many of our men and women who have valiantly served their nation.”

Supporting those who have served in the military is important to us as active military veterans and their families have given so much, and we are honored to continue giving back to those who risked their lives to protect our freedoms.

“I’m a proud supporter of the Armed Forces. I’m also a proud mom of a West Point graduate who is currently serving the U.S. Army as a Black Hawk pilot,” said Stephanie Young, President of Disney Vacation Club, Adventures and Expeditions and Disney Institute, who delivered opening remarks on the final day of the Summit.

Veterans Institute Summit was created to inspire business professionals and organizations alike to create their own military veteran hiring programs using insights from The Walt Disney Company’s Heroes Work Here initiative. Heroes Work Here was introduced in 2012, and to date it has resulted in more than 11,000 veterans joining the company, representing all lines of work.

We appreciate the support from event sponsors Wounded Warrior Project, Amazon Global Military Affairs, The Hewlett Packard Enterprise Company, USAA, Optum Serve, Enterprise Holdings, Inc., and JPMorgan Chase & Co., who all share a passion for helping set veterans and military spouses up for success following their service to our country.

There is still more to come, and we’re not done yet! On August 31st, the U.S. Chamber of Commerce Foundation’s “Hiring our Heroes” program will be hosting a Virtual Career Fair. Held in collaboration with Disney’s Veterans Institute, job seekers from the military community can network and interview with employers from multiple industries. To learn more and register for the Aug. 31 Virtual Career Fair as a job seeker, visit HiringOurHeroes.org.