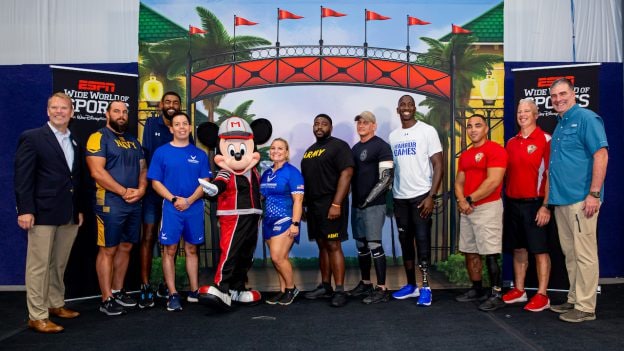 We are now one month away from the exciting 2022 Department of Defense (DoD) Warrior Games taking place at Walt Disney World Resort from Aug. 19-28. The event will bring adaptive sports to ESPN Wide World of Sports Complex while celebrating military heroes.

Ahead of next month’s nine-day competition, several Warrior Games competitors participated in a media event at AdventHealth Arena, showcasing their skills in sitting volleyball and wheelchair basketball earlier this week. The athletes participating in the display represented the Army, Navy, Air Force, Marines and Special Operations Command, five of the seven teams that will go head-to-head in the 2022 Warrior Games along with two international teams.

“I can’t wait for the opening ceremonies next month at Walt Disney World, everything that’s going to happen there. I just feel the hair on the back of my neck standing up already. I’m just so excited,” said USMC Sergeant (Ret.) Andrew Blackburn, an Orlando area athlete.

The highly anticipated adaptive sports competition will kick off with the Opening Ceremony on Aug. 19 and will feature 12 sports, including archery, cycling (both road race and time trials), precision air marksmanship, sitting volleyball, swimming and more. Beyond physical skills, the Warrior Games highlights the mental toughness of wounded, ill and injured active-duty and veteran service members.

A special appearance from Mickey Mouse added to the magic of the day as the athletes gave those in attendance a taste of what’s to come when the Warrior Games officially begin in Aug.