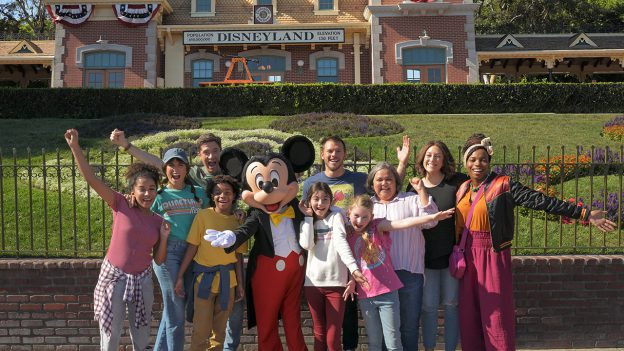 ABC’s ‘Home Economics’ is Going to Disneyland, Tune-in Tomorrow for the Season Premiere!

It’s a dream come true, the Hayworths are going to Disneyland! ABC’s hit comedy show “Home Economics” kicks off its third season at the Happiest Place on Earth – the Disneyland Resort in California. I have always been a HUGE television fan and working on this project has been a career highlight. Developing and producing a half-hour show is hard work and takes a village, and it is an awesome feeling to be a part of it and see it all come together.

“Home Economics” takes a look at the heartwarming yet super uncomfortable and sometimes frustrating relationship between three adult siblings. The series stars Topher Grace as Tom, Caitlin McGee as Sarah, Jimmy Tatro as Connor, Karla Souza as Marina, and Sasheer Zamata as Denise. It is a star-studded cast and everyone couldn’t have been nicer to work with.

In the Season 3 premiere episode, Connor has a hidden agenda, as the Happiest Place on Earth is the perfect place to reveal to Tom the secret from last season’s finale: He is the mysterious Dutch investor who purchased the failing company that’s publishing Tom’s book. He knows Tom will freak out about his younger brother being his “boss,” so Connor plans to soften the blow by revealing it at Star Wars: Galaxy’s Edge as Tom is a lifelong Star Wars fan. I can’t give too much away so you’ll have to watch the episode to find out what happens next …

During and between the taping, the cast were able to ride attractions such as Millennium Falcon: Smugglers Run, Big Thunder Mountain Railroad, Incredicoaster, and Mad Tea Party, as well as meet Mickey Mouse, Chewbacca, R2-D2, Iron Man, and Spider-Man. They were also able to try many of the Disneyland-fan favorite food items like churros, DOLE Whips, turkey legs, corn dogs, candy apples, and popcorn.

We cannot wait for you to see the episode tomorrow … so we are giving you a behind-the-scenes look at the production! Check it out now:

Don’t miss the Season 3 Premiere of “Home Economics” TOMORROW at 9:30/8:30c on ABC and the next day on Hulu! Tune in and follow along with the social conversation using the hashtag #HomeEconomics.