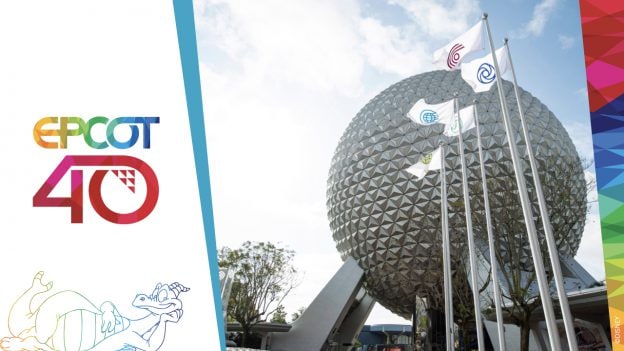 Celebrating 40 Years of EPCOT: Cast Members Share a Look Behind the Magic

It’s been said that EPCOT is a park about people – from the stories told through the park’s unique attractions and cultural experiences, to the guests who inspire innovation and new possibilities. At the heart of this unique theme park are the cast members who’ve been making magic over the last four decades.

Recently, I had the honor of sitting down with a few of those cast members to see the park through their eyes. Here are their stories:

Phyllis Wilkins working at The Land pavilion in EPCOT in 1982.

Phyllis Wilkins started her Disney career back when Magic Kingdom Park was the only theme park at Walt Disney World. When she heard there was an opportunity to join the opening team for a new park called EPCOT, she knew she had to be a part of it. She had a unique vantage point of the park’s construction as she worked high above Tomorrowland.

“I got the opportunity to watch Spaceship Earth get built from the Astro Orbiter because that was the attraction I was working at,” Phyllis said. “When I signed up to join the EPCOT team, I didn’t know what I was going into. I’d heard there would be things about the future, things about different countries.”

Nearly 40 years later, she still remembers the excitement and awe among cast members and guests alike on opening day.

“I was anxiously waiting at the entrance doors to The Land pavilion for our guests to arrive. You could hear the music and everything going on,” she remembers. “It was very exciting. We kept looking around like, ‘Are they coming yet? Are they here?’”

As an opening day cast member at The Land pavilion, Phyllis witnessed the wide-eyed wonder and amazement on the first guests’ faces. It’s an expression she still sees on guests to this day who visit EPCOT for the first time.

“It’s a park that’s about learning new things – whether you’re learning about hydroponics or whatever new communication is going on. More people now know about the hydroponics in The Land, but there are still folks out there who have never seen anything like that before,” Phyllis said. “To hear them say ‘It’s growing in thin air. How does it get its water?’ is still very amazing. You never know. They may become an astrophysicist or find something that they love just from something they saw here.”

Today, Phyllis is a Guest Experience Manager at World Showcase East where she oversees the hosts and hostesses at the attractions.

“I never know what my day is going to bring. I never know who I’m going to meet or where they’re going to be from. To meet people that have traveled here, sometimes for the first time, and to hear their story is a great experience. What keeps me here is the people, whether it be our cast members or our guests.”

That’s a sentiment that Lisa Michelle Sigbjornsen shares as well.

“People see I’m from Norway and they come over and start talking,” she said. “Suddenly, I have a best friend. That’s the best part of working here, that you get to make those impacts that you cannot make anywhere else.”

Six years ago, Lisa was excited to represent her family’s heritage as a Cultural Representative in the Norway pavilion. To her, there’s nothing better than sharing her culture and traditions with the guests who visit EPCOT.

“The Norway pavilion is a mixture of so many things,” Lisa said. “I love it. I was so surprised that they have only 11 countries and Norway is one of them. That is really cool. When people ask where I’m from, I get to talk about my hometown. They love hearing this stuff. Everyone is like ‘Where is this? I want to go there!’ It makes me so proud of where I’m from.”

Today, Lisa makes magic as an Attractions Coordinator in World Showcase East. Each day, she has the opportunity to work closely with her fellow cast members and connect with the new Cultural Representatives who call EPCOT home.

“When I was a Cultural Representative, I got to make friends all over World Showcase. I had fun at work, but also during my time off. It was a little Disney bubble, and it was the most magical place,” Lisa said. “We all are a family so no matter how hard it is, I understand. I’ve been there. That’s why I love being a coordinator. I can help.”

When Paul Keane was 22 years old, he learned about the Cultural Representative Program at EPCOT through a brochure. Once he saw Walt Disney’s iconic quote, “You can design and create and build the most wonderful place in the world. But it takes people to make the dream a reality,” Paul knew this was where he wanted to work.

He boarded an airplane for the first time ever and made the 10-hour flight from England to Florida, excited about the possibilities ahead in his new role as a food and beverage host at the Rose & Crown Pub in the United Kingdom pavilion.

“Back in the U.K., I was a chef. I’d just finished culinary school. To leave Europe to come to the States, it’s a big deal. I’d never been to Disney,” Keane said. “This kid from Liverpool would never have gotten to scuba dive or go on a hot air balloon ride or make friends from around the world.”

What started as an exciting opportunity has turned into a 27-year career. Paul worked his way from bartender to manager at the Rose & Crown Pub. Eventually, he branched out into casting, costuming and training, where he currently works as the Regional Training Manager for EPCOT and Disney’s Hollywood Studios.

“It’s been more special for me because as the company’s grown and as EPCOT has grown, I’ve grown too,” Keane said. “I went from this 22-year-old kid who didn’t have a care in the world to taking on bigger responsibilities. It’s been kinda neat.”

Now, Paul guides the new Cultural Representatives who come to EPCOT to start their own adventures. Having been in their shoes, he’s proud to share his experience and open their eyes to the endless possibilities within the Walt Disney Company. “When I meet with cast members now, I tell them to set goals for every meeting they go to. Set yourself objectives. It can happen. There are lots of great people who want to help you.”

As these three cast members reflect on the major milestone ahead for their home park, they can’t help but smile at the limitless possibilities ahead.

“I love that the main entrance is [once again] a replica of the original main entrance,” Phyllis said. “It was so beautiful when it was all planted out with flowers. To see how quickly things changed as we were getting ready to open, now it’s happening all over again. It’s very cool to see the change.”

“Thinking about it, I want to cry. I’m so excited to be here,” said Lisa. “To be able to tell my grandchildren later, ‘I was there when EPCOT turned 40.’ This is going to be so much fun!”

“Watching it from 1990 to now, it’s going to be really exciting to celebrate the 40th,” Paul said. “Look at all the great things the park has coming. It’s gone through a massive transformation. Bring on another 40 years!”

I couldn’t have said it better myself. Cheers to EPCOT on its 40th Anniversary and also to all of the cast members who bring the magic of possibility to life every day!