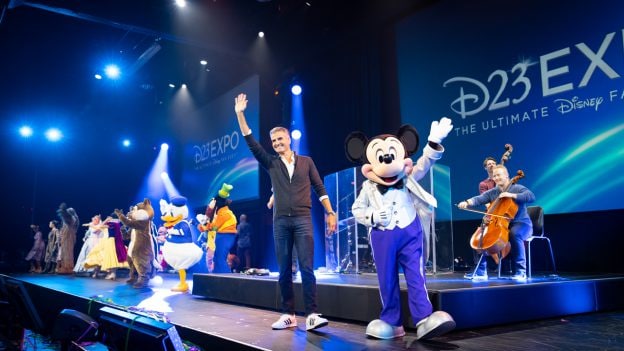 D23 Expo: LIVE Updates on Future Experiences Coming to Disney Parks and Beyond

Thank you for watching our special weekend LIVE coverage from D23 Expo 2022. Keep checking the Disney Park Blog for the latest on the stories shared today and more!

Attention Disney Parks fans! Exciting new announcements and updates on some of our most highly anticipated projects around the world are being shared during Sunday’s “A Boundless Future: Disney Parks, Experiences and Products” presentation at D23 Expo 2022 – and we’re covering it all LIVE here on the Disney Parks Blog!

Disney Parks, Experiences and Products Chairman Josh D’Amaro is offering a special look at Disney’s boundless future and the innovative ways the next generation of Disney magic is coming to life at our parks, resorts and beyond – along with a few surprises! Be among the first to hear the exciting updates during special LIVE D23 Expo coverage beginning at 10:30 a.m. PT/1:30 p.m. ET on Sunday, Sept. 11.

Josh wraps his presentation with, “here’s to the next 100 years, and the boundless future we’ll create together.”

“Wondrous Journeys” at Disneyland park will ignite the wonder in everyone and feature nods to all 60 Walt Disney Animation Studios films to date, taking viewers on a journey filled with artistry, music, storytelling and heart.  The show will feature a new song called “It’s Wondrous.”

Special entertainment moments will also pop up across the resort, including the long-awaited return of the “Magic Happens” parade in spring.

BREAKING: Two new nighttime spectaculars — “World of Color – One” and a new fireworks show “Wondrous Journeys” — will kick off in late January at Disneyland Resort.

“World of Color – One” at Disney California Adventure will span the broad storytelling legacy of Disney’s first 100 years and tell a new story through Disney classics and new favorites.

Beginning in January, Disney 100 Years of Wonder will be the biggest celebration in the history of the company and include new décor, specialty food and beverages, character experiences and more!  It’ll be celebrated at parks around the world, with the heart of the celebration rooted at Disneyland Resort.

Chris and Jennifer discuss early concept explorations for Dinoland U.S.A. at Disney’s Animal Kingdom Park and potential expansion opportunities beyond Big Thunder Mountain at Magic Kingdom Park at Walt Disney World and even offer some creative “what if” ideas.

Beginning in 2024, Space Mountain at Tokyo Disneyland will undergo a transformation that will bring a new story and experience to the iconic attraction.

At Tokyo Disney Resort, “Frozen” is one of the stories coming to life as part of the Fantasy Springs expansion at Tokyo DisneySea, joining two other stories, “Peter Pan” and “Tangled,” plus a brand-new hotel integrated right into the park.

Fantasy Springs will feature several new Audio-Animatronics figures, including Elsa, who sings in Japanese and whose movements sync with the rhythms of the language.

“Frozen” is also one of the stories playing a role in the royal transformation of the iconic 5-star Disneyland Hotel in Paris. Every guest room and all the communal areas are being rethemed, taking inspiration from classics like “Cinderella,” “Sleeping Beauty,” “Tangled,” and more.

Also at Disneyland Paris, a new “Tangled”-themed family attraction will join the new gardens leading into the new “Frozen”-themed land.

At Disneyland Paris, a “Frozen”-themed land will be the next major milestone in the ongoing transformation of Walt Disney Studios park. This land will offer a gorgeous lakeside promenade and will immerse guests in the same magical wintry setting from the films.

World of Frozen will open in the second half of 2023 at Hong Kong Disneyland – the first of three Frozen-themed areas coming to international Disney parks.  World of Frozen – inspired by Walt Disney Animation Studios’ stunning films – will blend Arendelle with the park’s natural landscapes on Lantau Island.

Mickey’s favorite teddy bear, Duffy, is a favorite of fans in all three Disney resorts in Asia.  Josh just shared that Duffy & Friends will star in their very own six-episode, stop-motion animated series on Disney+ next year.

Shanghai Disney Resort will be the first Disney resort to bring the world of the Walt Disney Animation Studios film “Zootopia” to life.

At Zootopia Central Station, guests will find animals going about their daily lives. At the Zootopia Police Department, which doubles as the entrance for the land’s new family attraction, guests will be greeted by an Audio-Animatronics figure of Officer Clawhauser.

In the Bahamas, progress continues on a beautiful new island destination at Lighthouse Point, which will bring the natural beauty and rich culture of the Bahamas to life for Disney Cruise Line guests.

This new destination is inspired by the stories of the Bahamas!

For the first time, Disney Cruise Line is bringing the magic of a Disney vacation to families and fans in Australia and New Zealand during limited-time cruises that immerse guests in Disney, Pixar, Marvel and Star Wars stories beginning in late October 2023.

Also, repositioning cruises for the Disney Wonder will be the first South Pacific voyages for Disney Cruise Line, giving guests the chance to experience destinations like Fiji and Samoa.

Imagineers have dreamed up a new design concept inspired by the theme of adventure, celebrating Walt Disney’s lifelong love of exploration. The Grand Hall is inspired by the grandeur and mystery of a gilded palace, drawing on real-world influences from Asia and Africa, and paying homage to the far-off land of Agrabah. At the center, the signature statue will feature Aladdin, Jasmine and their Magic Carpet.

At the Haunted Mansion, the Hatbox Ghost will materialize in 2023 in Magic Kingdom Park at Walt Disney World Resort!

Also, by the end of next year you’ll get the chance to meet Figment once again!  Fan-favorite character Figment will appear to meet park guests by the end of 2023.

Journey of Water, Inspired by Moana will open in late 2023, inviting guests to follow the story of water on the planet, inspired by Moana’s connection to the ocean.

Also, the next major milestone in EPCOT’s multi-year transformation will include the completion of the World Celebration neighborhood in late 2023, featuring a new statue of Walt Disney called “Walt the Dreamer.”

Tony Award-winner and Disney Legend Anika Noni Rose, the voice of Tiana in “The Princess and The Frog,” takes the stage for a special performance following the update on Tiana’s Bayou Adventure coming to Walt Disney World Resort and Disneyland Resort in late 2024.

Several members of the original film cast will return to lend their voices to the attraction, including Anika Noni Rose as Tiana, Bruno Campos as Naveen, Michael Leon Wooley as Louis and Jenifer Lewis as Mama Odie.

At Disneyland park, Mickey & Minnie’s Runaway Railway will invite guests into a cartoon world where toon rules apply, and Mickey’s Toontown will step into a new era of inclusive experiences for families of all ages when it opens in early 2023.

BREAKING – runDisney races will return to Disneyland Resort in 2024!

Also opening in the Downtown Disney District is a Southern Californian favorite, Porto’s Bakery & Café!  The bakery is known for its sweet pastries and treats, savory Cuban food, and incredible desserts.

Josh shares a first look at what Din Tai Fung will look like at the Downtown Disney District. This family-run restaurant will bring flavorful Chinese cuisine to the area where guests can enjoy dishes served family style in a creative space.

At the Downtown Disney District at Disneyland Resort, more than a dozen shopping and dining locations will be opening in the future.

Progress is continuing on the reimagining of the Paradise Pier Hotel to Pixar Place Hotel. Josh says Pixar Place Hotel will be a place where you’ll feel as though you’ve stepped into a Pixar art gallery featuring new interpretations of favorite Pixar pals.

Also at Disney California Adventure park, Pacific Wharf will be reimagined as San Fransokyo from the Walt Disney Animation Studios film “Big Hero 6,” and feature a place to meet Baymax as well as new spots to eat and shop.

JUST ANNOUNCED – Avengers Campus at Disneyland Resort will head into the Multiverse with a third attraction with a brand-new story!  When joining battle with the Avengers, you never know what foes you’ll face from anywhere and everywhen. More to come on this third attraction in the future here on the Disney Parks Blog.

Marvel Studios President Kevin Feige also makes a special appearance and shares the exciting update that the Incredible Hulk will be appearing in Avengers Campus in his Quantum Suit at Disney California Adventure Park beginning next week!

Executive Producer and Disney Legend Jon Favreau joins Josh on stage to help share a first look at the Mandalorian and Grogu before they begin encountering guests inside Star Wars: Galaxy’s Edge at Disneyland Park beginning in mid-November!

At Disneyland Paris, as part of the grand finale of the 30th Anniversary celebration, a new stage show, “Pixar: We Belong Together,” will debut next year in Walt Disney Studios park.

JUST ANNOUNCED! Next year, the popular anthem “Happily Ever After” will play again when an updated nighttime spectacular returns to light up the skies over Cinderella Castle at Walt Disney World Resort in 2023.