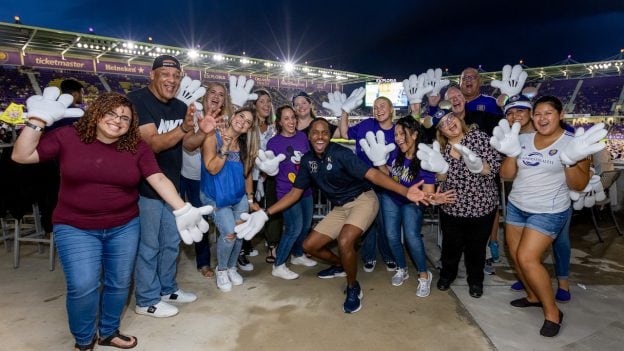 One of the best parts of the 50th Anniversary of Walt Disney World is celebrating with our magic makers and members of the community, which is why it was extra special working with Orlando City Soccer – an organization we’ve been a sponsor of since the club first arrived in 2015 – to honor cast members and local teachers during two recent games.

“Our cast and community are so important to all of us and have been at the forefront of this milestone anniversary since it began nearly a year ago,” said Tajiana Ancora-Brown, Director of External Affairs at Walt Disney World Resort. “To be able to continue celebrating with them in this distinctly Disney way alongside an organization we’ve worked with since its beginning means the world.”

We kicked off the first of two “Disney Nights” in style at Exploria Stadium with Orlando Pride, joining in its celebration of Mission W which recognizes trailblazing women across Central Florida who are breaking barriers. Who better to join than some of our incredible female leaders at Disney, including members of our cast-led Women’s Inclusion Network?

“It was exciting to be part of the Women’s Power & Equality night and have the honor to be the guest for the coin toss and game ball delivery,” said Lisa Becket, Senior Vice President of Global Marketing for Disney Parks, Experiences and Products. “My family and I are huge Pride fans and loved watching every minute of the action alongside fellow cast members. We look forward to cheering them on in the playoffs.”

The fun didn’t stop there! We then brought The World’s Most Magical Celebration to fans in the stands during an Orlando City match and invited local teachers from Orange and Osceola counties to join us as we continue to welcome them back to school and kick off the year in EARidescent style. Of course, Mickey Mouse & Minnie Mouse had stopped by to say “hello” and congratulate the outstanding Teachers of the Game.

This joins some of our other recent efforts like our annual Back-to-School Drive here at Walt Disney World which raised more than 40K essential school supplies and more than $17K for teachers in our local communities.

“It was a wonderful evening celebrating with Mickey & Minnie and our local teachers – including a few who were former students of mine,” said Dr. Michael Armbruster, Executive Director at Orange County Academy of Sciences and Arts. “Thank you, Disney, for recognizing these amazing educators!”

Seeing the smiling faces of the fans, cast members and teachers as we celebrated these “Disney Nights” together made it clear that even a little pixie dust can go a long way. Thank you to each and every one of our cast & community members who continue to spread that pixie dust across Central Florida and make a difference in the place we call home.