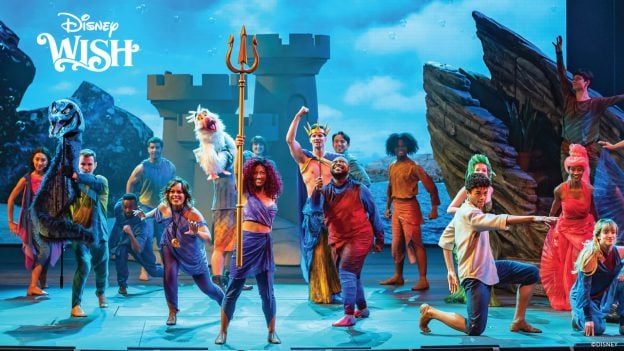 As guests aboard the all-new Disney Wish cruise ship delight in a one-of-a-kind theatrical adaptation of “The Little Mermaid,” the Walt Disney Theatre comes to life with talented performers, colorful costumes and captivating stories about life under the sea.

In addition to a delightfully reimagined story, many of the Disney Cruise Line costumes and set pieces used in the show were made from an unlikely material: recycled plastic.

That’s right! More than 60 percent of all fabric used in “Disney The Little Mermaid” – including 22 of 25 costumes – was made from plastic debris recovered from the ocean. Scooped up out of the sea, these whosits, whatsits and thingamabobs were melted into threads that were woven into material emulating fine silk, chiffon and cotton.

The fabrics were also uniquely dyed using a waterless printing method that saved tens of thousands of gallons of water compared to traditional dyeing processes. Designers experimented with a home-brewed, small batch dyeing method to perfect the fabrics’ bright colors and bold patterns before creating digital art files that could be sent to the waterless printer.

By recycling plastic debris and minimizing water waste, the team continued Disney’s long-standing commitment to conservation while creating one-of-a kind, show-stopping costumes that add to the unique story being told on stage. Take a look at these incredible costumes in the video below!

The show’s design team knew right from the start that they wanted to be intentional about every aspect of the show’s costuming – both in construction and design. To create the wide variety of fabrics needed for the show, the design team partnered with fabric technology experts and suppliers to produce custom ocean-recycled textiles seen on stage.

Our use of ocean-recycled fabrics on stage demonstrates the feasibility of using these and other sustainable materials to create beautiful, long-lasting and high-quality costumes. In fact, crew member costumes across the Disney Cruise Line fleet at places like deck bars and Cabanas have already been replaced with fabrics made from recycled water bottles! And there are plans for even more sustainable costumes to be added in other areas of our ships. Through these initiatives, Disney Cruise Line is staying at the forefront of the transformation taking place within the garment and costume industries when it comes to sustainability.

So, the next time you journey aboard the Disney Wish, do as Ariel would and “look at this stuff. Isn’t it neat?”