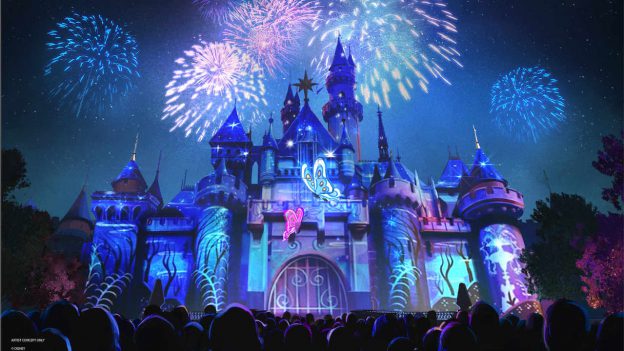 At D23 Expo 2022 this weekend, Disney Parks, Experiences and Products Chairman Josh D’Amaro shared many exciting announcements and updates for various projects in development at the Disneyland Resort.

Here’s everything you need to know, plus a bonus announcement and some extra details to keep the buzz going!

The Mandalorian and Grogu Coming to Star Wars: Galaxy’s Edge in Disneyland Park

Since opening Star Wars: Galaxy’s Edge in 2019, Star Wars storytelling has expanded to include more new characters and tales from that galaxy far, far away. At Disneyland Resort, some of those new stories were incorporated in the land earlier this year with legendary bounty hunter Boba Fett and mercenary Fennec Shand. Today, it was announced that The Mandalorian and Grogu will make their first appearance on Batuu at Disneyland park starting in mid-November.

New Heroes (and Villains) Coming to Avengers Campus at Disney California Adventure Park, Plus All-New Details on a Future Attraction

More than 35 different characters have already made appearances in Avengers Campus in Disney California Adventure park since it opened last year. Meeting and interacting with these larger-than-life characters is part of what makes Avengers Campus so epic.

Beginning next week for a limited time, you may have the opportunity to have your own heroic encounter with The Incredible Hulk, who will appear in his Quantum Suit inside Avengers Campus.

And as Avengers Campus expands into the multiverse, so do its possibilities!

During the Legends Ceremony at D23 Expo on Friday, Sept. 9, Disney CEO Bob Chapek announced Avengers Campus at Disney California Adventure will be expanding with a third attraction featuring a brand-new story that will bring guests into battle alongside their favorite Super Heroes. Today, Josh D’Amaro and President of Marvel Studios, Kevin Feige, shared details around the third attraction that will be coming to Disneyland Resort in the future.

Avengers Campus will expand into the multiverse, which will also expand the stories we can tell inside the land.

The new concept for this attraction will be an epic family adventure, where you’ll get to team up with more of the Avengers and their allies to battle against foes from the multiverse, including King Thanos, a villain designed specifically for Avengers Campus.

Pacific Wharf in Disney California Adventure park, which evokes San Francisco’s waterfront, will be reimagined into San Fransokyo from “Big Hero 6,” where East meets West, and technology meets tradition. Imagineers are in the early phases of this work, but you can see glimpses of what’s to come for children of all ages – the young and young at heart. There will be a place to meet Baymax, plus new spots to eat and shop!

As previously announced, we are reimagining Disney’s Paradise Pier Hotel with a Pixar theme. Today we shared that it will be called Pixar Place Hotel.

The hotel will weave the artistry of Pixar into its comfortable, contemporary setting, including fantastic areas for everyone to enjoy, like this “Finding Nemo”-themed splash pad area.

And even more news we are thrilled to share here on the Disney Parks Blog first – fans of fried chicken and maple bacon donuts, rejoice! We will welcome the team from Southern California local favorite Great Maple, which will open a flagship restaurant on the first floor and operate other food and beverage locations throughout Pixar Place Hotel. This modern American eatery specializes in upscale comfort food with a twist, serving fresh takes on American classics for breakfast, lunch and dinner.

In the Downtown Disney District, there are plans to introduce more than a dozen new and reimagined locations.

Earlier this year we announced Din Tai Fung, a world-renowned Asian restaurant that originated in Taiwan and specializes in soup dumplings, will join the district with its authentic cuisine. Here’s a look at new concept art for this space.

Additionally, Porto’s Bakery and Café, an iconic Southern California destination known across the country for its sweet pastries and desserts, as well as delicious California –Cuban-inspired dishes, will be coming to the Downtown Disney District in the future!

runDisney to Return to Disneyland Resort in 2024

runDisney races will return to the Disneyland Resort in 2024! Stay tuned to rundisney.com for details on specific dates, registration information and more.

As we’ve previously shared, an ambitious transformation of Mickey’s Toontown in Disneyland park is underway. The neighborhood that Mickey Mouse and friends call home will reopen as a vibrant symphony of sights, sounds and sensations. The reimagined land will feature some all-new experiences and interactive play for guests, with a focus on family and young children.

Coming to Mickey’s Toontown will be a new attraction, the family-friendly and adventurous Mickey & Minnie’s Runaway Railway. Disney Imagineers are making some clever adjustments to the attraction to ensure it perfectly fits into the story of Mickey’s Toontown.

Today, we shared a closer look inside the El CapiTOON Theater, where a special exhibit created by the Toontown Hysterical Society is celebrating all things Mickey with costumes and props from the toon world.

…all the way through more modern favorites such as “Mickey’s Christmas Carol” and iconic music releases.

And building on the legacy of Mickey’s Toontown, upon reopening the land there will be more opportunities for families to play together, with new open, grassy play spaces for everyone to unplug. We are stepping into a new era of inclusive experiences in this land, for families of all ages.

Here’s a look at Goofy’s How-to-Play Yard. Goofy’s neck of the woods will be dedicated to all things play, where the soft, spongy ground is the perfect place for youngsters to enjoy a fun, enclosed area. Here, Goofy encourages his son, Max, and all his friends to play the Goofy way.

Within this rendering of the brand-new Goofy’s How-To-Play Yard, you can see one of its silliest areas – a playful sound garden. Adults can take a rest while their little ones discover all the fun and wacky sounds the garden makes. They’ll also have a chance to explore an all-new, elevated clubhouse.

Inside his house, Goofy has set up a candy-making contraption that only he could imagine.

Here you see Donald’s Boat, which has crashed in the duck pond of the Goof homestead! Around Donald’s Duck Pond are larger-than-life spinning water lilies, balance beams and rocking toys that will keep adventurous kids busy. And for those who like a little splash in their step, a flood of fun awaits.

These new experiences will join existing favorites like Roger Rabbit’s Car Toon Spin, Mickey’s House and Minnie’s House. Plus, other attractions will be reimagined in new and exciting ways, including Gadget’s Go Coaster. Mickey’s Toontown will reopen in early 2023.

Tiana’s Bayou Adventure will open at the Disneyland Resort (and Walt Disney World Resort) in late 2024. The new attraction’s story will pick up right where “The Princess and the Frog” left off. At the end of the film, Princess Tiana realizes her lifelong dream when she opens her restaurant, Tiana’s Palace. We pick up the story during Carnival season, when Tiana is hosting a party for the people of New Orleans. She discovers her celebration is missing a key ingredient and needs our help to find it. On Tiana’s Bayou Adventure, we’ll join Tiana and Louis on a trip to the bayou, where they meet all sorts of unexpected new friends who have a special role to play at the party.

The attraction will get a whole new look and feel. Plus, Imagineers are blending tried-and-true techniques with the latest technology to make this feel like an entirely new attraction.

Additionally, it was announced that talented voices from the film will reprise their roles in the attraction, including Bruno Campos as Prince Naveen, Michael Leon Wooley as Louis, Jenifer Lewis as Mama Odie, and the one and only Anika Noni Rose as Princess Tiana. This is especially exciting news since music will be a big part of the experience on Tiana’s Bayou Adventure.

At Disneyland park, Tiana’s Bayou Adventure will be in New Orleans Square, which allows for the opportunity to tell even more Tiana stories.

An all-new retail store will be opening in New Orleans Square at Disneyland on Sept. 20, 2022, called Eudora’s Chic Boutique Featuring Tiana’s Gourmet Secrets. Tiana is collaborating with her talented dressmaker mother, Eudora, to open this fantastic little shop, with accessories to create and serve masterful Orleans-style cuisine and more.

Disney100 Celebration at Disneyland Resort Kicks Off in Late January 2023

At Disneyland Resort, the Disney100 anniversary celebration will kick off in late January 2023 with special limited-time celebrations taking place throughout the whole year. The Happiest Place on Earth will receive new platinum-infused décor, new sparkling looks for Mickey Mouse, Minnie Mouse and their pals, special food and beverage offerings, and so much more.

Disneyland Resort guests will be dazzled by two all-new nighttime spectaculars: “World of Color – One” at Disney California Adventure park and “Wondrous Journeys” at Disneyland park.

“World of Color – One” will celebrate the storytelling legacy started by Walt Disney a century ago. It will tell a new story of how a single action, like a drop of water, creates a ripple that can grow into a wave of change. It brings some of the most courageous, loving and inspiring characters to life in new ways. The show will also feature a new original song, “Start a Wave.”

And at Disneyland park, Walt’s original magic kingdom will become a magnificent canvas with “Wondrous Journeys,” a new nighttime spectacular that will ignite the wonder in all of us. It will feature nods to all 60 Walt Disney Animation Studios films to date, taking us on a journey filled with artistry, music, storytelling and heart. It will continue to build upon the park’s state-of-the-art projection effects, turning Main Street, U.S.A., Sleeping Beauty Castle, the façade of “it’s a small world” and the Rivers of America into an artist’s canvas that brings characters to life all around you as fireworks dance in the sky. “Wondrous Journeys” will also feature an incredible new song, “It’s Wondrous,” which D23 Expo fans heard for the first time today!

Plus, in the spring, the long-awaited return of the “Magic Happens” parade will debut at Disneyland park. We look forward to sharing many more details about how Disneyland Resort will celebrate the company’s 100th anniversary in the weeks and months to come.

We hope all this news gets you as excited as we are about the many new experiences coming to the Disneyland Resort! As always, be sure to keep your eyes on the Disney Parks Blog for more details and news on these projects in the future.