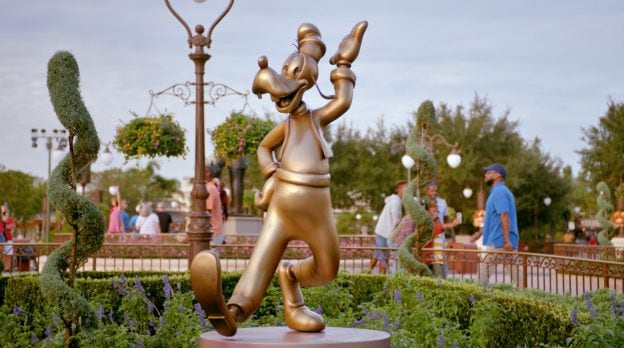 Goofy: 9 Decades of Showing Us ‘How’ It’s Done!

On September 27, 1947, an historic cinema milestone occurred: Mickey Mouse and his pals Donald Duck and Goofy appeared together for the first time in a feature-length animated film, Walt Disney’s “Fun and Fancy Free.” In it, in lieu of Jack, the trio took a trip up a beanstalk where they found themselves tiny trespassers in the realm of an unpredictable giant.

Goofy set out on that adventure with optimistic confidence–and his same jaunty stride has been captured in a golden statue gracing the Plaza Hub in front of Cinderella Castle at Walt Disney World, The Most Magical Place on Earth. Part of the “Disney Fab 50 Character Collection,” (#DisneyWorld50), Goofy’s statue is positioned in enviable proximity to the famous “Partners” bronze, celebrating Walt himself—and why not? Much like Mr. Disney’s professional path in real life, Goofy’s cartoon career has been a tale of a humble beginning resulting in world-wide fame.

Even though Goofy’s roles began by showcasing his simple-but-sincere naiveté, as he grew in popularity, he was given more and more responsibility in his one-reel outings. Soon he achieved not only co-star status with Mickey and Donald, but acquired an astonishing array of “skills” as well. Starting just three years after his debut, from 1935 to 1940 audiences saw Goofy doing his best as a musician, service station attendant, clock cleaner, ghost exterminator, boat builder and billposter, among other occupations. Perhaps it’s because of these fast and varied “apprenticeships” that around 1940, Goofy found his way to what many would feel to be his ultimate on-screen calling: educational film star! There may have been an inspirational show-biz mentor’s influence here, as well…

In 1940, Walt Disney was on the verge of moving his California film studio over the hill from Hyperion Avenue in Los Angeles to Burbank’s Buena Vista Street. To show off his beautiful, purpose-built animation campus, a feature film production was devised during which humorist Robert Benchley would “tour” the studio, showcasing the cartoon craft through his misadventures. (The script had Benchley “looking for Walt” in order to suggest an animated version of Kenneth Grahame’s “The Reluctant Dragon,” hence the name of the finished picture.)

Benchley was a celebrated writer and wit, not only a mainstay of New York’s famed Algonquin Round Table, but a Broadway and film personality as well. In Hollywood, Benchley struck celluloid gold with a series of wry, clever featurettes in which he both lectured on and demonstrated various activities of life, generally with disastrous results. After winning an Academy Award in 1935 for “How to Sleep,” Benchley wrote and starred in more than a dozen such productions, concluding with “How to Take a Vacation” in 1941.

Could the timing of Goofy’s first foray into instructional short subjects be more than coincidental? Perhaps, in his time on the Disney lot, Robert Benchley realized that his bumbling on-screen persona had more than met its match in Goofy, and the actor ceded his patented pedantic pratfalls to the younger (and injury-proof) animated Goof? In an idea likely hatched by Disney’s story department as a subtle tribute to Benchley’s comic mastery, it is within “The Reluctant Dragon” that the star is treated to a Moviola viewing of “How to Ride a Horse,” a showcase for equestrian “dos” and “don’ts” gamely attempted…and re-attempted by Goofy. Benchley is delighted with the lesson, and with the endorsement of the master, therefore, it seems that this was the point where Goofy took over as Tinseltown’s master of the “How To” film.

A mere five months after “The Reluctant Dragon” premiered, Goofy undertook a “crash” course in “The Art of Skiing,” and just weeks later, conquered “The Art of Self Defense.” By 1942, Goofy had settled into a Benchley-esque rhythm, and films such as “How to Play Baseball,” “How to Swim,” “How to Fish,” “How to Be Sailor,” “How to Play Golf,” and “How to Play Football” followed in quick succession. In “The Big Wash,” Goofy tackled elephant bathing; “Aquamania” and “Freewayphobia” showcased the perils of inattentive vehicle use both on water and the asphalt shore. Gymnastics, photography, detective work, even medieval jousting were examined. In 1953, Goofy demonstrated “How to Dance” with music provided by the Firehouse 5 + 2, the popular Dixieland band made up of Disney animators and other studio personnel. That same year, perhaps as a specific nod to his footlight fore-bearer Robert Benchley, Goofy starred in his own version of “How to Sleep.”

As Goofy’s time began to be divided between film, television and in-person meetings with his fans visiting the Disney Parks, he still found time for some “How To” moments, particularly in the 1999 “Mickey Mouse Works” TV series, where there are no less than 12 “informative” episodes. In 2007, Goofy addressed the breve new (and confusing) world of entertainment technology with the short theatrical release “How to Hook Up Your Home Theater,” and in 2021, Walt Disney Animation Studios returned to this classic form with Goofy conquering three timely skills needed as the world learned “How to Stay at Home.” Appropriately, these hilarious mini-segments were first available—for home viewing—on Disney+.

Though it has now been 90 years since Goofy’s 1932 debut, his stellar career, cheerful explorations and their creatively calamitous results will continue just as long as there are new topics to explore throughout the world…particularly now that “The World’s Most Magical Celebration” (50 years of Walt Disney World) has been welcoming both nostalgic returnees and brand-new guests eager to learn all about the enchantments that await them there. No matter how many diverse jobs, skills, sports and activities Goofy has encountered on screens thus far, it is safe to say that his favorite would have to be the in-person “How To Greet a Friend…” with no instruction required for a big, goof-tacular hug!