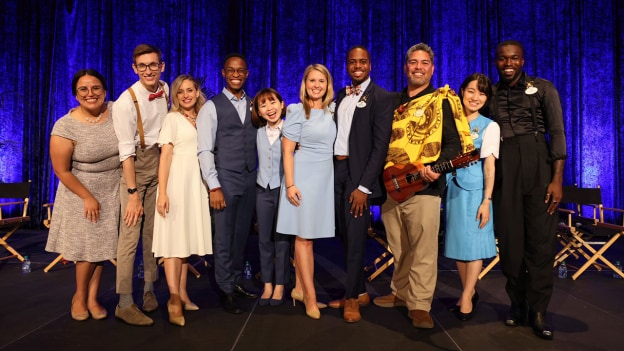 Disney Ambassadors from parks and resorts around the world gathered under the same roof this month to discuss the challenges and triumphs that have guided their Disney journeys. The heartfelt conversation was part of Disney Ambassador Presents, a series of live panels at Disneyland Resort that provide development, engagement and networking opportunities for cast members.

“I am a firm believer of manifesting and putting that good energy into the universe and working at it over the years,” shared Disney Ambassador of Walt Disney World Resort Raevon Redding. “It’s been a journey…. but I wouldn’t want it any other way.”

Each Disney Ambassador shared stories about the perseverance, patience and dreaming that allowed them to grow within The Walt Disney Company.

“There is an important expression that is so dear to my heart. ‘If you can dream it, you can do it,’” shared Mika. “With this saying, I’ve been able to overcome my hardships. With these words of inspiration, my Ambassador family and cast members, I will strive to reach my dreams.”

The role of Ambassador has not only been life-changing for many, but has also brought a unique opportunity for the panelists to appreciate the outstanding cast members who make magic every day.

“When I went into this process [of] applying for Ambassador, it was our cast members that I was passionate about and I wanted to really authentically represent them and to support them and to celebrate them for all that they accomplish in a day, whether that be big or small,” shared Ali.

Lily added, “As a Disney Ambassador, I am able to see the process of how each and every cast member is so dedicated to achieve the never-ending show readiness, just to give the best to our guests.”

Many of the panelists took a vulnerable approach in recounting their challenges along the way. Some audience members were moved to tears.

“I wasn’t born into a wealthy family and I watched my mother study through nights,” shared Tony. “I can tell you about the day I got my first paycheck and spent half of it on clothes and sent half of it home. So much has happened.”

Tony said his nomination as the first non-local in the first Ambassador team at Hong Kong Disneyland has changed his life. “I am in America for the first time ever.”

The evening ended with Kanoa joyfully strumming “How Far I’ll Go” on the ukulele, from the Walt Disney Animation Studios’ film “Moana.” The cast member-filled audience sang the song’s chorus with heart.

In the panel’s final moments, Carmen summed up the Ambassador role with a fitting metaphor. “We are disco balls,” she told cast. “We get the light, but our job here is to bring it back to you and bring the spotlight back on you.”