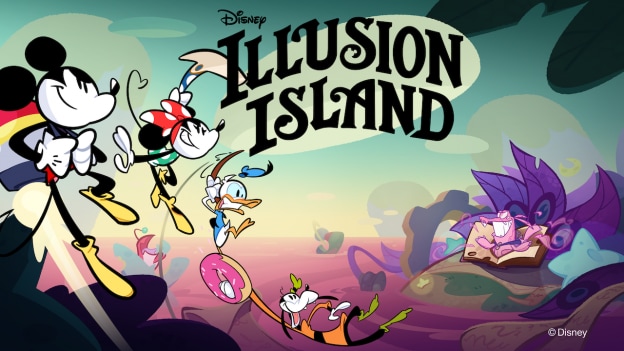 Have you heard the news? Mickey Mouse, Minnie Mouse, Donald Duck, and Goofy are starring in a brand new 2D adventure platformer game! Announced today at D23 Expo and in collaboration with Disney and Pixar Games, Dlala Studios is bringing The Fab Four to your screens in the upcoming title, Disney Illusion Island, which makes its debut on the Nintendo Switch system.

The Fab Four have been summoned to the mysterious island of Monoth to embark on a dangerous mission. Three magical Tomes – powerful books used to protect the island – have been taken, throwing Monoth into chaos! Vowing to be the heroes Monoth needs, Mickey & Friends set off on a perilous quest to explore this vast, unknown world to recover the mystical books. But the journey will not be easy, and with intrigue afoot, not everything is what it seems on this “Illusion Island”!

Choose your favorite character – Mickey, Minnie, Donald, or Goofy – and embark on a grand adventure solo or grab up to three friends in this cooperative 2D adventure platformer. Run, swim, swing, and jump your way through the beautifully hand-crafted world and discover rich biomes and environments as you try to save the world from disaster! Unlock powerful abilities, solve fun puzzles and take on epic boss battles, discover hidden secrets, and meet a cast of original characters as you travel through the never-before-seen island of Monoth.