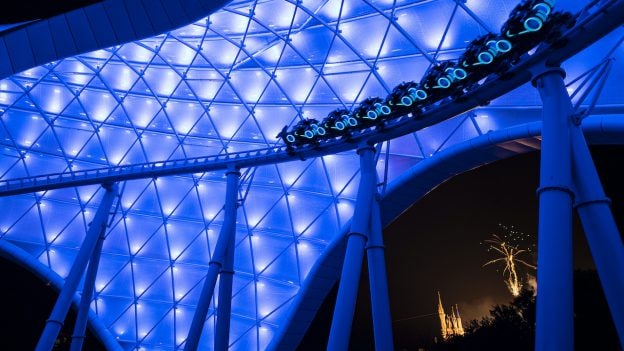 The “Most Magical Place on Earth” is known for inspiring imagination and creating unforgettable memories for generations. Well, get ready because the magic at Walt Disney World Resort is flourishing with all-new attractions, the return of fan-favorites and the addition of beloved characters.

Ready to begin … Those words will fill the air with the popular anthem “Happily Ever After” when an updated nighttime spectacular lights up the skies at Magic Kingdom Park in 2023.

That won’t be the only addition lighting up the skies at Magic Kingdom Park. Neon lights and speeding lightcycles will fill Tomorrowland as your chance to enter the grid with TRON Lightcycle / Run arrives in spring 2023. You’ll climb aboard your very own Lightcycle and race through a dark, computerized world alongside your family and friends. As you swoop and swerve throughout the course, your team will compete to be the first to race through eight Energy Gates and claim victory.

Foolish mortals, prepare yourselves for a new happy haunt at the Haunted Mansion. The Hatbox Ghost has heard your calls and will materialize next year. You may recognize this popular character from the attraction at Disneyland Resort in California.

Are you ready to head down the bayou? Tiana’s Bayou Adventure will take you along with Princess Tiana, Prince Naveen and their friends as they host a party at Tiana’s Place for the people of New Orleans. It’s up to you to help find the missing ingredient when this exciting new attraction opens in late 2024.

The Transformation of EPCOT Continues

The multi-year transformation of EPCOT will soon reach another major milestone with the completion of the World Celebration neighborhood in late 2023.

With lush, green space for you to relax, plus the opening of Communicore Hall and Communicore Plaza, this central location in the park will be the new home for festivals and the perfect space to gather with family and friends. It will also be home to Dreamers Point, an inspiring new area where you can view the new Walt Disney statue called “Walt the Dreamer.”

Over in World Nature – the EPCOT neighborhood dedicated to understanding and preserving the beauty, awe, and balance of the natural world – we’re excited to share that Journey of Water, Inspired by Moana, will also open in late 2023. The new exploration trail will allow guests to learn about the story of water on our planet. As you may have seen through Moana’s bond with the ocean, water has a mind of its own, and you’ll get to interact with it throughout this attraction.

Imagination has always been a core theme at EPCOT, with attractions and experiences that push the boundaries. There’s one key character who always comes to mind when we think about imagination, and he’s coming to life in a whole new way by the end of next year. That’s right, you’ll be able to meet Figment in person at EPCOT.

As we look ahead to the future and the celebration of the Walt Disney Company’s 100th anniversary, we’re excited to share that a new nighttime spectacular is in the works for EPCOT. The new show is currently in development and will debut late next year, carrying on the park’s legacy of inspiring nighttime entertainment that unites guests around World Showcase Lagoon.

There’s so much to look forward to! What are you most excited about? Stay tuned to the Disney Parks Blog for more updates about what’s to come at Walt Disney World Resort.