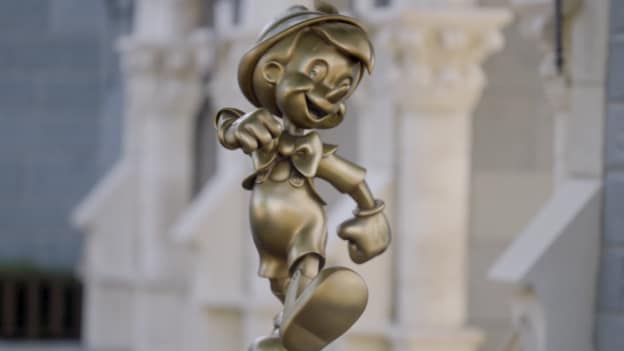 Pinocchio and the Power of a Disney ‘Wish’

Just a cricket’s hop away from the charming, old world Pinocchio Village Haus in Fantasyland, “The Most Magical Place on Earth,” Walt Disney World, boasts one of the merriest members of the Disney Fab 50 Character Collection (#DisneyWorld50).

It’s Pinocchio himself, in the form of a golden statue that captures the little puppet in jaunty mid-stride–relishing the special freedom that only a stringless marionette can enjoy. How Pinocchio shed his strings is well known: woodcarver Geppetto’s wish upon the evening star was granted by the Blue Fairy. Even more well known, though, is the tale’s musical tribute to all wishes, and the dreamers behind them, that distills anyone’s happiest hopes into one unforgettable melody.

“When You Wish Upon A Star” was written by composer Leigh Harline, who had already contributed melodies to many Disney productions, and Hollywood lyricist Ned Washington. Working together at Disney’s Hyperion Avenue studio in Los Angeles, the pair penned tunes like “Hi-Diddle-Dee-Dee,” “Give A Little Whistle” and “I’ve Got No Strings” for “Pinocchio,” but it was their elegant reverie on the power of a heartfelt wish, completed early in the film’s production, that would set the tone for the entire motion picture, and define the role that Jiminy Cricket (voiced by singer Cliff Edwards) would play in the story. “When You Wish Upon A Star” garnered an Academy Award (Best Song) for Washington and Harline; the tunesmiths also shared an Oscar with Disney Legend Paul J. Smith for the film’s music overall (Best Original Score).

“When You Wish Upon A Star” was a popular hit on radio and records as well–the 1940 “pop” recording by Glenn Miller and his Orchestra spent five weeks as the number one tune on the charts. In England, at a time of uncertainty, Vera Lynn’s lovely recording was a huge hit as well. In 1954, when Walt Disney launched his weekly anthology series on television, the show’s theme needed to be a universal invitation to audiences to enter the program’s ever-changing kaleidoscope of imagination and education–so naturally, “When You Wish Upon A Star” was the choice. This new prominence launched a sort of renaissance for the song, and it became one of the most recorded tunes ever, crossing nearly every stylistic musical boundary.

Singers of “standards” embraced it, and Tony Bennett, Rosemary Clooney, Johnny Mathis and Louis Armstrong were among the first. The “Star” shone over the world of jazz, and artists like Dave Brubeck, on his 1957 album “Dave Digs Disney,” helped make it an interpretive staple. Orchestral versions abounded, with diverse presenters ranging from Henry Mancini and Arthur Fiedler (with the Boston Pops) to the English Chamber Orchestra. Even the world of rock has taken to wishing on stars: Stevie Wonder, Ringo Starr, Olivia Newton-John, Billy Joel, Neil Diamond, Linda Ronstadt, Diana Ross and the Supremes, Rod Stewart and Kiss bassist Gene Simmons have all counted this Disney classic in their repertoires. Recently, Beyoncé performed “When You Wish Upon A Star” for the “Disney Family Singalong” in 2020, and Christina Aguilera and the Orlando Philharmonic launched “The World’s Most Magical Celebration: 50 Years of Walt Disney World,” with a stunning rendition at Cinderella Castle, which aired on the actual anniversary date of October 1st, 2021.

There have been many re-tellings of “Pinocchio,” and talented musicians like Steven Schwartz (“Disney’s My Son Pinocchio: Geppetto’s Musical Tale” for the stage) and John Williams (the 1977 film “Close Encounters of the Third Kind”) have interpolated the uplifting message of “When You Wish Upon A Star” into their new works. Now joining that august group is composer Alan Silvestri, whose new score for director Robert Zemeckis’ live-action “Pinocchio” (which arrives on Disney+ September 8, 2022). Silvestri, who has previously scored Disney films like “Who Framed Roger Rabbit” (1988) and “Lilo And Stitch” (2002) will be joined in this newest incarnation of “When You Wish Upon A Star” by Cynthia Erivo, who portrays the Blue Fairy–wielder of the wand that brings Pinocchio to life.

A Tony winner and Oscar nominee, Cynthia Erivo is no stranger to the beauty of “When You Wish Upon A Star.” The British-born singer/actress was part of a starry tribute to revered English songstress Vera Lynn on the occasion of her 100th birthday in 2017. To celebrate, a select group of Lynn’s vintage vocals were combined with new orchestrations, and contemporary performers joined her in duets. Cynthia Erivo’s gentle, soaring voice was added to Lynn’s original 1940 interpretation of the “Pinocchio” hit, and the resulting recording has a magic that transcends the decades, much like the song itself.

Disney Legend Julie Andrews performed “When You Wish Upon A Star” in 1971 as part of “The Grand Opening of Walt Disney World” TV spectacular, and she did so again for “Disneyland’s 30th Anniversary Celebration.” In her introduction to the song on the 1985 telecast, Andrews speaks movingly of her time working with Walt Disney and remarks that, “He always seemed to be able to see beyond the now into what could be.” That should come as no surprise because, as the song says, isn’t that just “as dreamers do?”

“When You Wish Upon A Star” will continue to be the anthem of optimism and heartfelt hope that the world–and Walt–first fell in love with over eighty years ago, and it will always bring new light and joy to audiences everywhere as it unfailingly delights, encourages and enchants.

Stream “Pinocchio,” a Disney+ Day premiere, on September 8 on Disney+!

Likes (11)
Share Pinocchio and the Power of a Disney ‘Wish’