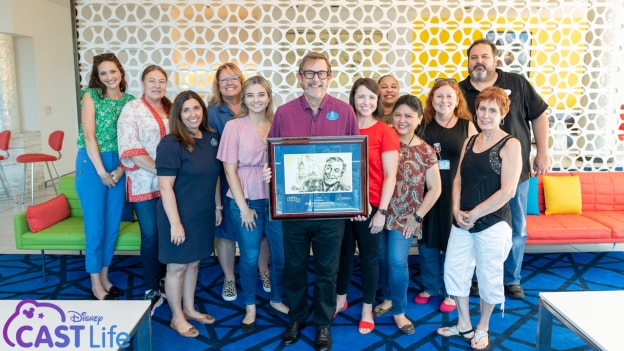 The past month has been full of special moments across Disney Parks, Experiences and Products as worthy cast members, crew, Imagineers and employees were surprised with the prestigious Walt Disney Legacy Award in front of their fellow team members and loved ones. Teams behind the scenes have worked tirelessly to organize these celebratory events, where recipients are presented with their signature blue nametags. But what happens when you need to plan a surprise event for the person who helps run the program?

Setting up the Scene

Cast Activities Engagement Manager Rick Henson has been with the company for 41 years. He helped launch The Walt Disney Legacy Award program in 2011 and currently manages the annual nomination and award processes for recipients across several states. During award announcement season, he attends several surprise events on a daily basis at the Disneyland Resort to celebrate recipients, who are nominated by their peers.

Renee Hierholzer, his counterpart at Walt Disney World Resort, shared that in a “true team effort over many months,” the steps that the small number of people who were in on the big secret took to keep it confidential were endless. To pull off the tall order of keeping it a true surprise from someone involved in every step of the process, they went into stealth mode, removing him from daily emails, rerouting the award items that had his name on them to an address separate from the rest, hiding his name on recipient tracking reports, retracting some of his document access and, of course, avoiding his consistent questions and concerns.

“I was so clueless; I was thinking that everyone was just leaving me alone so that I could get some extra work done,” Rick said. “But one day, [a team member] came over to me and was really persistent with getting me to come with him to this specific notification … when I walked in, I immediately began trying to figure out who it was for. And then I saw the sign that said my name. It was such an incredible, surreal and amazing moment.”

“Receiving this award on behalf of my peers was an overwhelmingly special moment that I’ll never forget,” shared Rick, pictured here with his new Legacy nametag.

Evolution of the Award

The Walt Disney Legacy Award started as a domestic program with solely theme park involvement but has since evolved into a global program spanning countries where Disney has employees, including Brazil, Dubai, Switzerland and more. Keep an eye out for history-making cast members, crew, Imagineers and employees donning their very own blue nametags around the world!