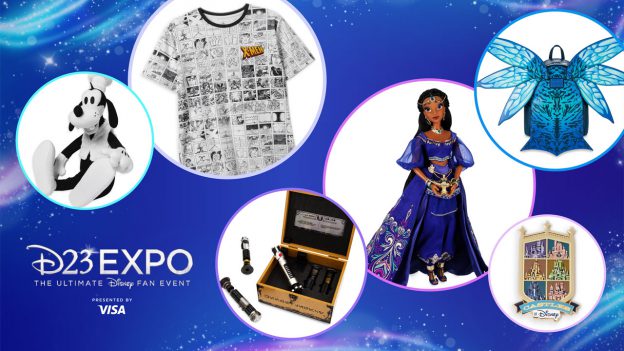 Disney fans, rejoice! D23 Expo 2022, presented by Visa, is right around the corner, returning September 9 through 11 in Anaheim, California. Since D23: The Official Disney Fan Club’s first fan event in 2009, D23 Expo has become a cherished bi-annual festivity of characters, cosplay, storytelling, Mousequerade, and magic. This year, we’re in store for a particularly wonderful event, as D23 Expo 2022 ushers in The Walt Disney Company’s 100th anniversary. Whether celebrating the kickoff of Disney 100 Years of Wonder with us in person or at home, fans across every generation can bring the wonder of Disney into their own lives with this year’s merchandise debuting at D23 Expo 2022.

In spirit of the celebration, Disney devotees won’t want to miss out on these pieces influenced by the classics. Fall in love with your favorites all over again with the Disney Ducks and Goofy 90th anniversary apparel. From the Duck Tales Bomber Jacket and all-over print Joggers to the knit Goofy Sweater and reversible “Art of Skiing” Bucket Hat, it’s too hard to pick just one! I’m loving how the contemporary designs have been interwoven with original concept artwork. If you can’t get enough of the old-school aesthetic, you’ll obsess over the Goofy Dippy Dawg Plush, showcasing our furry friend in a retro makeover. Also stay on the lookout for the D23 Expo Limited-Edition Joe Ledbetter Vinyl Collection, which brings back Mickey and Friends in their original, Inkblot animated style. Speaking of originals, it’s the 40th Anniversary of “Tron”, and we have just the thing for it. Prepare to marvel at the Tron Loungefly Backpack’s faux-leather, glow-in-the-dark design, equipped with a light-up LED disk pocket and black metal hardware throughout. Pair the backpack with some new showstopper flare inspired by Flynn’s Arcade: The Tron Pin and Patch set. Retro is in, and this retro-inspired set is sure to amp up any Disney Live Action fan’s look.

Bring the magic of animation to life with Disney’s newest Limited-Edition Anniversary Pin collection. Each piece features a unique concept art display set behind lively characters who (literally!) pop right out of the background. This year marks the anniversary of several animated gems as well. Decorate in the Hellenistic style with the Limited-Edition Disney Hercules Muses Figure from our Hercules 25th anniversary collection, or dress to dazzle with the “Just One Bite” canvas Snow White Tote in honor of this princess’s 85th anniversary. And if you like princesses, you’ll fawn over the new collector dolls, showcasing Jasmine, Merida, and my gal Giselle in commemoration of these Disney, Pixar, and Walt Disney Animation Studios collector fan-iversaries. My personal favorite has to be the Color Me Courtney Tiana Headband Set; the sunny orange print and pearl-studded sateen scrunch gorgeously encapsulates the whimsical New Orleans charm of Tiana’s animated adventure.

Are Disney Parks more your cup of tea? The Teacups are a classic ride across the Parks, and the D23 Expo Mad Tea Party Purse is bound to become a staple wardrobe piece with how perfectly “curiouser and curiouser” it is. Or bring the delight of Dumbo into your home with the adorable Dumbo Planter modeled after the Flying Elephant carousel. Also debuting at D23 Expo are the Global Ear Headbands, representing some of the Disney Parks around the world. Feel the magic of the Disneyland Shanghai and Hong Kong Resorts when you put on a pair of these sparkly ears! Want even more Parks apparel? Stay on the lookout for the chic Castle Jacket from our Castle Collection—with its classic denim and all-over print, the jacket bridges Disney fun and urban style. Top it off with one of the Castles Limited-Edition Pins to dazzle.

Marvel fans, tune in: we have plenty to share with you too. The World of Wakanda collection showcases a range of textiles, apparel, accessories, and more inspired by Black Panther Universe and the Kingdom of Wakanda. The jewelry is particularly eye-catching, with its unique detailing and sharp metallic sheen. Spider-Man fans can also make a bold statement sporting the Limited-Edition Spider-Man Color Block Tee. As a streetwear aficionado and a comic book advocate, I’m particularly excited for the X-Men ‘90s animation line—just look at the all-over VHS print on the X-Men Fashion Tee, or the embroidered Xavier Baseball Cap! Part of this collection, in collaboration with Hasbro, also includes a first to market opportunity to grab the Marvel Legends Series X-Men Mystique ‘90s Animated Series figure. Toy lovers will adore our other new collectibles, including the Captain Carter Metal Die-Cast Shield, the Hot Toys Spider-Man Collectible, and the Limited Release Golden Spider-Bot. End your weekend on a high note with the launch of our very first Marvel nuiMOs Character plush, Groot, inspired by the “I AM GROOT” shorts now streaming on Disney+. It’s holdable, poseable, squeezable, and lovable!

Get ready to honor the Force with these sleek Star Wars products. Ashley Eckstein’s “Guided by the Light” collection includes a range of fashion-forward ‘fits styled with light-reflective treatment and accessories to match. The Star Wars Water Bottle is particularly unique, centered around a built-in crystal to light-up your liquids and reflective exterior ink to make you shine. Die-hard Star Wars fans won’t want to miss out on our “must haves,” including the Limited-Edition Obi-Wan Kenobi Legacy Lightsaber Set. The set includes three different hilts modeled after those used by Obi-Wan, along with a wooden box that plays sound from Obi-Wan’s first appearance in “Star Wars: A New Hope” when opened. All three Lightsaber collectibles illuminate blue when connected to a Legacy Lightsaber Blade or to Savi’s Workshop blade. At shopDisney, we love our spirit jerseys, and I must spread the love for the Limited-Edition Star Wars Jersey fit with vintage action figures and color blocking. Throw in the Retro Baseball Cap to complete the look! If you like Lucasfilm, this first-ever Willow Reaction Figure in collaboration with Super7 is a collector’s essential, inspired by the classic Willow film. Featuring Princess Elora Danan, this figure will only be available through Disney Parks and shopDisney. More exciting Willow products will be available later this fall, so keep an eye out.

We know Avatar fans have been waiting for this! It was recently announced that Avatar, from 20th Century Studios, will return to theaters Friday, September 23, in stunning 4K High Dynamic Range. In preparation for this re-release and the highly-anticipated sequel, “Avatar: The Way of Water,” set to release this December, we have captivating new merchandise on its way. I’m a fan of the ultra-cozy cotton sweatsuit splattered in tie-dye, and made of recycled polyester—a cool and comfortable fit for movie viewing. Complete the look or spice up another with the Avatar Pin. This accessory is rich with detailing, showcasing a picturesque landscape of Pandora. Everyone loves Loungefly, but the Avatar Loungefly Backpack takes it to another level. Feel like you’re linking with your own Banshee with this bright blue backpack, styled with an intricate striped-pattern and shimmering wings as we prepare to fly into the next century of The Walt Disney Company.

Be it a souvenir from Disney Classics, Animation, Parks, Marvel, Lucasfilm, or 20th Century, D23 Expo 2022 features something for everyone. Event attendees will get first pick of limited-edition items at D23 Expo, but a selection of these items is set to roll out on shopDisney and other retail locations following the event. Remember, this is just a sneak peek of what we have to offer—stay tuned for what’s to come (we promise, there’s more!) and as always, keep chasing your dreams.