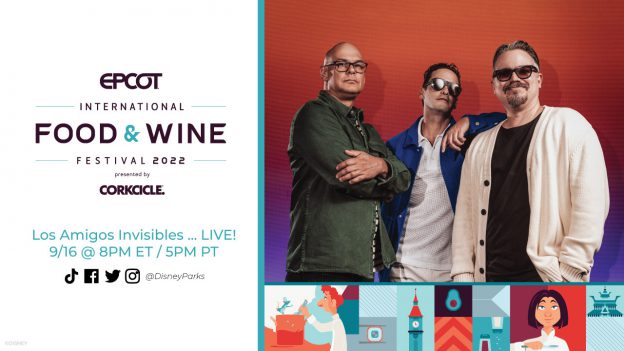 This live event has concluded. Stay tuned to the Disney Parks Blog for future events.

Hola #DisneyFamilia! What better way to start celebrating Hispanic and Latin American Heritage Month at Walt Disney World Resort than by dancing to the rhythm of music with our familia and amigos?

This year la fiesta will feature a blend of bolero, reggae, bossa nova, disco, and jazz brought by the international award-winning band Los Amigos Invisibles. The popular performers from Venezuela will be part of the lineup for the Eat to the Beat Concert Series presented by Florida Blue Medicare at the EPCOT International Food & Wine Festival presented by CORKCICLE.

Los Amigos Invisibles will make their debut on Friday, Sept. 16, and you can join in the fun at 8:00 p.m. ET by watching a livestream of their performance on the Disney Parks Blog and other Disney Parks social media channels.

Los Amigos Invisibles is the first Venezuelan band to perform at EPCOT, and their EPCOT performances will include some of the best from their repertoire.

Los Amigos Invisibles will perform three times a day on Sept. 16 and 17 at the America Gardens Theatre Stage. To experience the 2022 EPCOT International Food & Wine Festival, guests need both a valid park admission and a park reservation for EPCOT on the same date. For more details on this year’s festival, guests may visit TasteEpcot.com.

Don’t forget, Friday’s livestream fiesta on the Disney Parks Blog starts at 8:00 p.m. ET. Then, keep following #TogetherWeAreMagia on social media for more updates that will highlight all the Disney Parks festivities and unique experiences as we celebrate Hispanic and Latin American Heritage Month!