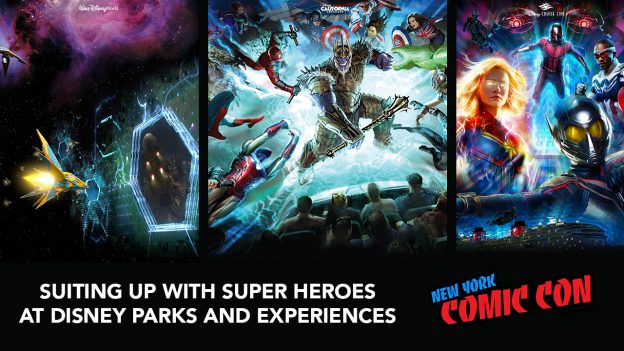 The creative minds behind fan-favorite Super Hero experiences assembled on Friday, Oct. 7 at New York Comic Con for the Suiting Up with Super Heroes at Disney Parks and Experiences panel. Those in attendance heard from experts from across The Walt Disney Company who provided a behind-the-scenes look into how beloved Super Hero stories have been brought to life around the world.

In 2022 alone, Avengers Campus opened at Disneyland Paris, Guardians of the Galaxy: Cosmic Rewind at EPCOT started launching guests on an intergalactic chase through space and time and plans for a third attraction for Avengers Campus at the Disneyland Resort were revealed during D23 Expo. This upcoming epic family adventure will let you team up with the Avengers and their allies to battle against foes from the multiverse, including King Thanos, a villain designed specifically for Avengers Campus. Also in 2022, the Disney Wish set sail with Worlds of Marvel and Marvel Super Hero Academy.

With Super Hero offerings now at Disney Parks in Anaheim, Orlando, Hong Kong, Paris and Shanghai, and on multiple ships across the Disney Cruise Line fleet, panelists had so much to discuss about the interconnected storytelling that brings fans into the action and allows them to join the next generation of Super Hero recruits. Whether it’s introducing new characters or opening new lands, one thing is certain from the panel: these heroic experiences are just getting started.

Since the opening of Avengers Campus at Disney California Adventure park, the roster of heroes guests can encounter has continued to grow with each new film or Disney+ series, from Shang-Chi to America Chavez, Loki, Moon Knight, Ms. Marvel and so many more. With the Nov. 11 release of “Black Panther: Wakanda Forever,” guests will soon discover even more at the Disneyland Resort. Check out the teaser below.

And also joining the Wakandan action just in time for the new film is Disneyland Paris! More details are coming soon on how the resort is celebrating the next chapter in the Black Panther story.

Disney Cruise Line guests can summon their inner Super Hero during an unforgettable day aboard the Disney Dream during select sailings from Miami in early 2023.

Occurring on one action-packed day during Marvel Day at Sea sailings, Super Heroes assemble aboard the ship in a full-scale takeover. The event includes all-day entertainment, encounters with Super Heroes and Villains, themed youth activities, an adults-only Ravagers party in the nightclub, special merchandise, unique food and beverage offerings and more. The event culminates with “Heroes Unite,” an action-packed show where the largest collection of Super Heroes and Villains face off in an exciting battle at sea — featuring incredible stunts, special effects, pyrotechnics and music taking over the upper decks of the ship.

As the Marvel Cinematic Universe has expanded, so has the roster of characters and stories we can bring to life on board, and it was announced during the panel that next year’s Marvel Day at Sea event will feature new characters and new entertainment inspired by recent films and television series. It’ll be everything our guests have loved about this event and more. If you love Super Heroes — and you want the perfect excuse to escape the winter and have an amazing tropical vacation — this is the cruise for you. More details about the new experiences coming to Marvel Day at Sea will be announced soon.

Announced earlier this year, Guardians of the Galaxy: Cosmic Rewind at EPCOT at Walt Disney World Resort will receive a special holiday remix just in time for the holidays. The Guardians will trade their classic hits playlist for a new holiday song for a limited time this holiday season. Guests will get the chance to help save the galaxy on the attraction they know and love all while rocking out to a mash-up of classic holiday tunes.

The panel may be over, but New York Comic Con attendees can still explore the Wonders of Xandar outpost. Following the successful opening of the Wonders of Xandar Pavilion at Walt Disney World Resort, Xandarians have traveled to New York to continue their mission of learning more about Terra (or as we call it, “Earth”). They’re trading Galactic Units in exchange for Terran artifacts or knowledge, and as it so happens, they also have a Zarg Nuts vending machine on site that accepts Galactic Units. Come meet the Xandarian Ambassadors, learn more about our shared galaxy and try Drax the Destroyer’s favorite snack for yourself!

The Wonders of Xandar outpost is inspired by Guardians of the Galaxy: Cosmic Rewind, an all new thrill-coaster at EPCOT in Florida. We know you’ll leave the space hungry for more…and luckily, Walt Disney World Resort is only a quick Terran flight away.