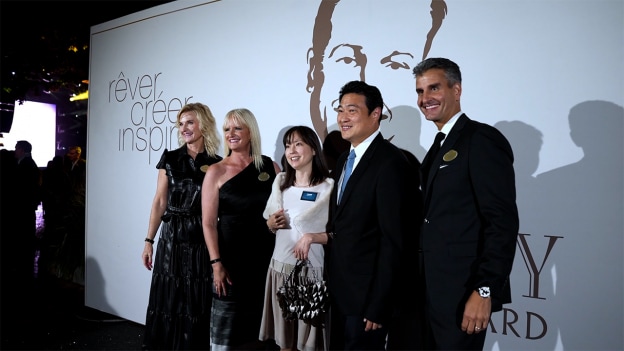 We recently celebrated 40 Walt Disney Legacy Award recipients during a special gala evening in Disneyland Paris. This unforgettable evening took place in Disneyland Park where the recipients and their invitees were first welcomed at Salon Mickey before boarding the Disneyland Railroad for a special train ride to Frontierland.

Upon arrival, Natacha Rafalski (President, Disneyland Paris), Josh D’Amaro (Chairman, Disney Parks, Experiences and Products) and Jill Estorino (President and Managing Director, Disney Parks International) were waiting for them on a black and gold carpet to congratulate them. The Walt Disney Legacy Award is the highest distinction our cast members, crew members, Imagineers and employees at Disney Parks, Experiences and Products can receive, and they’re easily spotted when visiting our Disney Parks thanks to their blue nametags. Each of the recipients have been nominated by their peers for their outstanding achievements in dreaming, creating and inspiring fellow cast members.

This year, we also had the pleasure to welcome and honor seven cast members from Walt Disney Imagineering, Consumer Products, Games and Publishing as well as Tokyo Disney Resort.

Congratulations to The Walt Disney Legacy Award recipients and never forget that Walt’s legacy lives on thanks to your and all of our cast members’ passion and dedication across our Disney Parks and Resorts around the world!