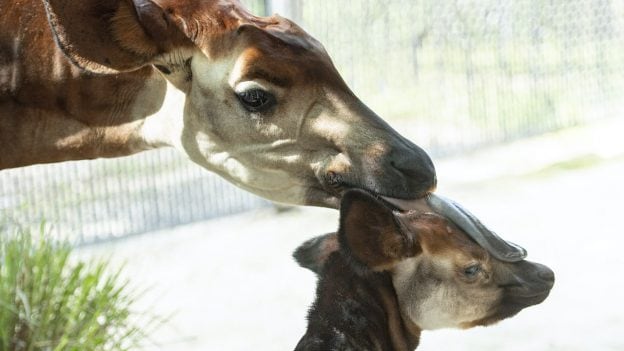 Today we’re happy to introduce you to Beni, the newest okapi at Disney’s Animal Kingdom Lodge. It’s especially exciting to share this news as World Okapi Day is right around the corner – Oct. 18. It’s a day that recognizes the significance of this endangered and enigmatic species.

Named by the keeper team, Beni was born in July to mom Olivia, and the pair remain in their backstage habitat where they spend time nuzzling, nursing and bonding.

Our animal care team is monitoring Beni and making sure he hits all the milestones of a growing okapi. In the coming months, he’ll make his debut on the Pembe Savanna – you may even catch a glimpse of him if you’re staying at Disney’s Animal Kingdom Lodge!

Beni is named in honor of a town in the Democratic Republic of the Congo (DRC), the only country where endangered okapis are found.

These elusive animals live in rainforests, and black-and-white stripes on their hindquarters and front legs help camouflage them among the trees. Though they look similar to zebras, they’re actually closely related to giraffes.

Early on, okapi calves “tuck” themselves into nests where they hide from predators. Shy and reclusive okapis are nearly impossible to spot in the rainforest and have earned the nickname “ghosts of the forests.” In fact, okapis were thought to be a myth until 1901 when they were first “discovered” by western scientists. This endangered species is a national symbol of the DRC, and they are cherished and revered by the people who live there.

There are an estimated 20,000 okapi in the world, and their population continues to decline due to poaching and habitat loss.

Beni’s birth was recommended through the Association of Zoos and Aquariums’ (AZA) Species Survival Plan, which ensures responsible breeding of threatened species in managed care. In addition to working with the AZA, Disney has provided long-term support to okapis in the DRC through the Okapi Conservation Project which works to protect wildlife, support communities and provide conservation education opportunities on the importance of protecting the forest for people and okapi.

In 2020, the Disney Conservation Fund also recognized the Okapi Conservation Project agroforestry team with the Disney Conservation Hero award. This annual award recognizes passionate individuals and teams who are working to save wildlife and engage their communities in conservation solutions. As we acknowledge World Okapi Day on Oct. 18, we celebrate the joyful arrival of Beni and the collective efforts to protect this stunning and vulnerable species.