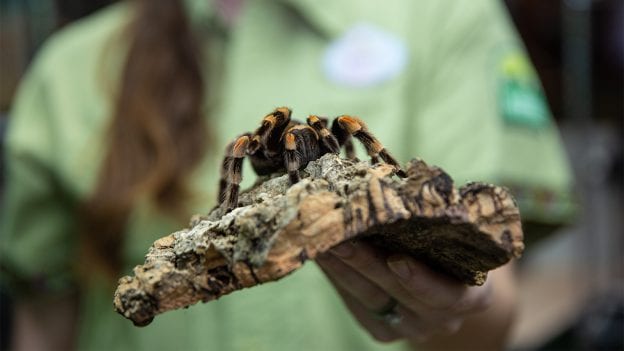 What comes to mind when you hear the word “spider?”

For many of us, it’s typically not warm and cuddly thoughts.

In fact, I’ll bet most of the spooky Halloween décor you’ve seen this year largely has centered around spiders, spider webs and other creatures that often send chills down our spines.

As spooky as spiders may be to some – or most of us – these arachnids are highly intelligent and heavily misunderstood creatures that positively impact the world around them. After all, they are nature’s pest control, eating mosquitoes, roaches and many other things that go bump in the night.

And while our own comfort and wellbeing is what immediately comes to mind when we encounter anything with more than four legs, Disney’s science and animal care teams instead focus primarily on the spiders on the other end of that equation. The team at Walt Disney World Resort cares for more than 10 different species, ranging from tiny jumping spiders to colorful tarantulas, and their passion for arachnids helps inspire curiosity and amazement in guests to create an unforgettable Disney experience.

“Working with tarantulas interests me so much because this species is often overlooked, and I love getting to work on projects that shine a light on species that often don’t get the same amount of attention,” shared Dr. Austin who works as a research manager on the science team. “My passion for research is focused on animal wellbeing, and I want to do work that helps ensure all animals have the best lives possible.”

When it comes to tarantulas, there have been very few studies that speak to the types of environments they prefer, so cast members on Disney’s Animals, Science and Environment team have been conducting an ongoing study over the last year to help answer this very question.

As part of their study to better understand tarantulas and their preferences, Dr. Austin and a team of cast members designed an interconnected habitat that gives the tarantulas an opportunity to choose their preferred environment. Think of it like a tiny home with a hallway between the living room and the family room, where the tarantulas get to decide which they want to visit. “If it all goes to plan, the answers to our questions will come directly from the tarantulas themselves via their behavior and choices,” says Dr. Austin.

Beyond obvious elements like habitat size and structure, the study also focuses on the items within the habitat, including local leaves, plants and shrubs known as browse. “We’ll go out and cut a little oak or rose or grape vine so the spiders have different textures they can feel, and it just provides a little more complexity for them,” said animal keeper Tayler who works with ectotherms, which are animals that depend on external sources to regulate their internal body temperatures.

Once all of this data is processed, ideally it then can be used to help ensure tarantulas at Walt Disney World Resort – and beyond – have environments and spaces they want to be in and, ultimately, are best suited for their physical, behavioral and psychological needs.

And what might the spiders think of all of this if they could speak? “I think most of them would be thinking they’re millionaires and living on cloud nine,” shared ectotherm animal keeper Nick. “They might say ‘Food just comes to me, and I get taken care of pretty well.’”

While the tarantula study is still underway, spider research and training are something Disney’s Animals, Science and Environment team has conducted for more than a decade. “We began with a training plan to work with jumping spiders,” said animal manager Jamie. “We chose this species because of their incredible eyesight and diurnal nature, which means they’re active during the daytime.” Using a laser pointer, the teams conducted training sessions with the jumping spiders to target a specific point that contained a food item.

This training has the potential for helpful applications in the future. Though targeting is just the first step, it could be useful in supporting the spiders to voluntarily shift from one habitat to another as needed.

“It potentially could allow us to ask them to kind of walk from one area to another without the need for a cover or hand, making it a much more positive experience,” said animal keeper Nick.

“We are always looking to ensure all the animals, big or small, that call Walt Disney World Resort home have the best care possible,” says Dr. Austin.

And while the team knows that spiders aren’t everyone’s cup of tea, they do hope you’ll give them a chance. If you see a spider in your house, most of the time you can safely relocate it outside with a container and a piece of paper.

“You may not be as crazy about spiders as we are,” shares animal keeper Tayler, “but as long as you appreciate what they do for us in the wild, that’s really all we can ask for.”