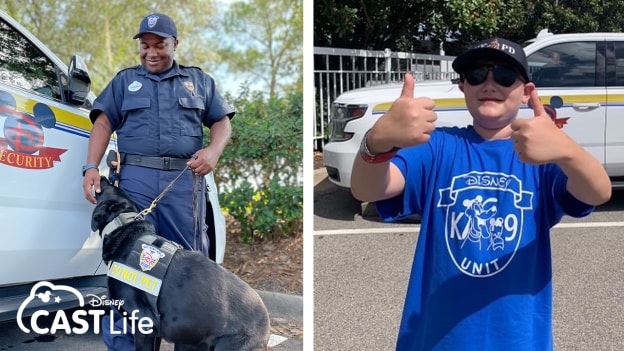 Whether it’s telling jokes as a Jungle Cruise skipper or selling balloons on Main Street, U.S.A., so many of us Disney Parks fans have a dream Disney cast role. For Matthew, an 11-year-old from New York, it’s working as a K9 handler on the security team.

After reading all about the K9 Handlers at Walt Disney World on the Disney Parks Blog, Matthew’s mother, Jaimie, wrote a letter to the team describing her son’s interest in K9 handling, complete with a photo of his NYPD K9-themed Halloween costume. “He’s very serious about the job,” she wrote. “No video games for him. Instead, he is spending his second summer in an NYPD camp five days a week!”

When security cast members at Walt Disney World heard about Matthew’s aspirations, they knew they wanted to create a lasting memory for him, so they gathered their K9 companions for some assistance creating an extra special magical moment.

During his family’s recent visit to Walt Disney World, Matthew was invited to meet the team, learn about their roles, and of course, say hello to the dogs. K9 Handler Damascus Bing and his K9 partner, Simba, introduced Matthew to some of their four-legged peers and even gave him a tour of one of their K9 vehicles.

It was an incredibly special moment for Matthew, his mother, and the cast members who were able to share their passion for what they do. “We had the best time today,” Matthew’s mother, Jamie, said. “You’re all so wonderful and I can’t thank you enough. It was real Disney magic.” Seeing how much Matthew enjoyed his time learning about the magic behind the scenes was a valuable reminder that the team’s hard work doesn’t go unnoticed.

“When we hear others want to be K9 handlers, it means there are people watching who realize what we’re doing and appreciate it,” said Damascus. “Seeing kids smile and enjoy themselves, knowing they’re safe and happy because we’re here protecting them, is what really drives us.”

Just like Matthew, so many guests see the important role security cast members play at our parks and resorts. Matthew even takes it one step further by aspiring to be on the team in the future. Lucky for him, he’s already made a paws-itively great first impression!

If you share Matthew’s interest in becoming a member of our security team at Walt Disney World, apply today to full-time and part-time opportunities at WaltDisneyWorld.jobs.