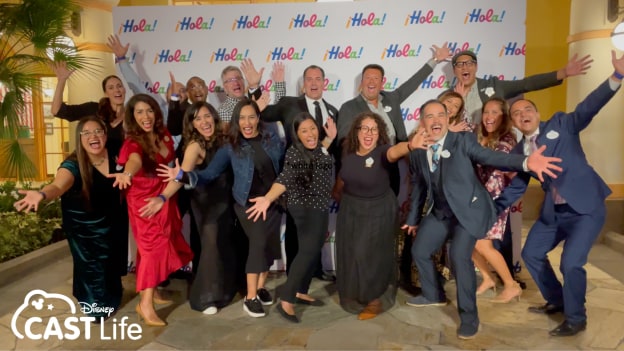 Under shimmering evening stars, cast members came together Sept. 28 for a once-in-a-lifetime celebration in the heart of Plaza de la Familia in Disney California Adventure park. Quince, an HOLA celebration, paid tribute to the 15 years since the HOLA Business Employee Resource Group (or BERG) was founded at the Disneyland Resort for Hispanic and Latin cast members. To commemorate the milestone, cast members attended the event dressed in their evening best and danced the night away alongside their Disney familia.

The evening festivities were inspired by the Quince, a well-known tradition among several Hispanic and Latin American communities. Commonly known as a quinceañera or quinceañero, the celebration takes place on a teenager’s 15th birthday, commemorating their coming of age and journey into adulthood. The tradition is commonly celebrated through a variety of customs including a religious service and grand party with friends and family.

“Seeing a quinceañera here at Disneyland means so much to me because it’s something I never would have imagined experiencing here as a cast member,” said Outdoor Vending cast member Juan Torres. “It was a nice surprise to see my culture being celebrated with others.”

The HOLA celebration incorporated a number of Quince traditions, each sprinkled with Disney magic. For example, the parents of the Quince traditionally changes his child’s flat shoes, symbolizing their transformation into adulthood. Similarly, HOLA leaders ceremoniously unveiled a new design of the HOLA logo as cast members cheered with orgullo (pride).

Another common Quince tradition includes the teenager’s padrinos (godparents). Prior to the celebration, the birthday child is encouraged to ask two important people in their life to be their godparents. The child’s godparents act as their mentors and on the day of the Quince, they present the child with a special gift. In lieu of traditional godparents, HOLA leaders asked their fellow BERG leaders to help carry on this tradition. A select number of BERGs in attendance presented a special gift to HOLA including: a Fleur de Lis from PULSE (African and Caribbean cast members), a Military Coin from SALUTE (military veteran cast members), an orchid plant from COMPASS (Asian American Pacific Islander cast members) and an America Chavez doll from PRIDE (LGBTQIA+ cast members).

With a live DJ, festive pastries and colorful décor, the evening radiated pure elation as cast members danced and sang alongside one another until the early morning. While the event was a celebration of HOLA’s history and growth, it was also evident that the experience served as a moment of representation and community empowerment.

“The voice of our community is embedded in our cast and our cast needs to be able see themselves. For the work that I do, I know that representation has always been important to me and who I look up to,” said Claudia Durón Burke, HOLA co-chair and career and education program manager. “It’s important for our cast to know that there are opportunities for them everywhere.”

Juan shared similar sentiments. “Representation is super important in our community because sometimes people can feel left out and when they see themselves working at Disneyland or on TV, they feel that they can be that person that they see wherever.”