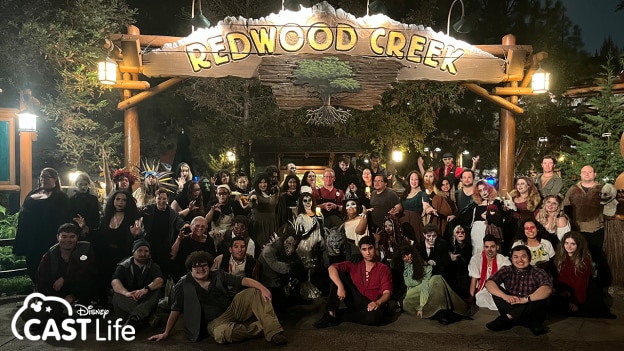 Approaching the dark, wooded forest on the edge of Ravenswood – the town that has taken over Redwood Creek Challenge Trail in Disney California Adventure park – you hear a whispered warning from behind: “don’t enter, turn back.” You quickly turn around, but no one is there. Despite your fears, you enter the shadows of the forest and suddenly realize that you have only the moonlight to guide your path. You’ve just entered the Twilight.

If this doesn’t sound like the family-friendly Disney treatment of Halloween, it’s because it’s not. The fictional town of Ravenswood served as the eerie setting for this year’s Cast Halloween Scare Maze, an annual after-hours event hosted by cast for cast that just marked its 12th year.

This year’s theme was Ravenswood’s Dawning of the Dusk, a celebration of peace and harmony between the witches of the Twilight Aether. Those who entered the town found themselves in the middle of a battle between the witches and the eternal vanguard, who wish to recruit visitors in the effort to uproot their foes from the town.

Cast members from around the resort were invited to attend the celebration on Oct. 12, which also included a carnival with food, games and booths hosted by the resort’s Business Employee Resource Groups (BERGs), and a Scare Zone with fortune tellers and jump scares. The evening culminated with the Halloween Scare Maze at Redwood Creek Challenge Trail.

More than 100 cast members spent several months preparing for the event with brainstorms, training sessions and rehearsals to ensure the most immersive experience for their fellow cast. “It’s great for so many cast members from different lines of business to come together because we are one large family. But with this event, we form an even stronger family coming together just to have fun during this time of year,” shared Richard Lau, who works in Star Wars: Galaxy’s Edge retail and was a creative director in this year’s event.

Explaining the importance of carrying on this traditional Halloween event, Operations Manager Tony Montenegro shared “This was truly a team effort. With cast members from around the resort coming together to work with entertainment, attractions and the BERGS, it’s truly magical to see how these cast members can bring their imagination to life.”

It was the first time attending the event for Joye Anderson, Attractions. “It’s really fun but way scarier than I thought!” she said. “We make magic for the guests all the time, but for [them] to make magic for us is really special.”

Creative Director Forrest Orta explained that every year brings new ideas and challenges for the maze. “Just like Imagineers want to one-up themselves with every new attraction or experience they build, we want to do the same thing,” he said. “We just want to keep opening new doors and try scary new things for our cast so I’m really excited for next year!”

For those looking for more ways to engage in the Halloween season this year, check out the #DisneyParksVoices on TikTok! You can now create your own frightfully fun video using any of the three text-to-speech character voices: Madame Leota from Haunted Mansion, the Ghost Host from Haunted Mansion or a scheming pirate from Pirates of the Caribbean. Be sure to use these #DisneyParksVoices to share your spooky content and for the chance to be featured on the official @DisneyParks TikTok account!

For more #DisneyCastLife tips and treats from this event, check out Disneyland Resort Cast and Community on Facebook and Instagram!