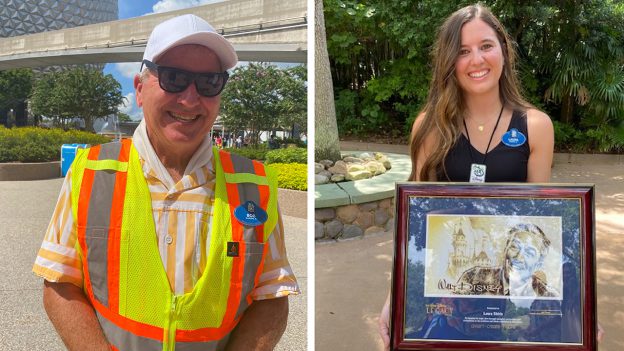 For Bob Skiris and his daughter Laura, it really is about keeping it all in the family. This father-daughter dynamic duo recently received The Walt Disney Legacy Award, which is among the Disney Parks, Experiences & Products’ highest honor awarded to truly exceptional cast members who excel in the criteria of Dream, Create and Inspire.

“It’s simply incredible, especially knowing that I was nominated by the people I work with every day,” said Bob, a parking host at EPCOT. “It’s history – Walt’s history – and such an honor.”

Now as Walt Disney Legacy Award recipients, Bob and Laura are part of the less than 1% of all Disney Parks, Experiences & Products cast members to be honored with this award.

As a parking host, Bob always creates a warm and welcoming environment by telling jokes and providing safety tips for guests visiting EPCOT. The positive environment Bob helps create is so infectious that it puts a smile on everyone’s face.

As a guest relations host at Disney’s Animal Kingdom, Laura was constantly dreaming up ways to make sure guests had an amazing day in the park, and that her peers were set up for success, which is part of the reason why she was nominated her for The Walt Disney Legacy Award.

Recently, Laura was promoted to a casting services coordinator. She now uses her skills to inspire the next generation of talent coming to Walt Disney World by sharing stories from her Disney career with applicants.

“Being a Walt Disney Legacy Award winner is very humbling, but I’m also reminded that I wouldn’t be here without the support of my leaders, fellow cast members and my dad,” Laura said. “He’s taught me so much over the years, including how to be a dedicated worker.”

Throughout Laura’s childhood, her dad worked hard by picking up extra shifts, learning new skills and being reliable.  “He worked hard to give us a happy life, yet never missed anything that my sister or I were involved in. I admired my dad so much growing up and still look up to him today,” Laura shared.

And now as cast members, we get to look up to this father-daughter duo who inspire all of us to bring out the best in each other.

Stay tuned to the Disney Parks Blog as we continue to recognize and celebrate the cast members, crew members, Imagineers and employees across the globe who dream, create and inspire just like Walt Disney.