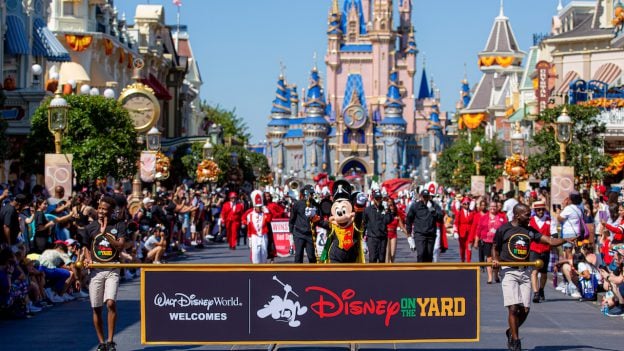 The pageantry and high-energy from HBCU Week is still reverberating around Walt Disney World Resort. The event was the largest ever in its six-year history. A whirlwind weekend of high-stepping marching bands, alumni reunions and inspiring moments of high school students getting on-the-spot college acceptances and scholarships.

The annual event, which raises awareness of Historically Black Colleges and Universities around the country, was a large-scale affair that featured a record attendance of more than 6,000 high school students from across the Southeastern United States and beyond, plus more than 50 HBCU representatives and corporate sponsors, who awarded roughly $10 million in scholarships and college admission offers during the college fair.

Djahnel Reid from Maynard Evans Senior High School in Orlando received the surprise of a lifetime by earning on-the-spot college admission to Bethune-Cookman University and $75,000 in college scholarships. Drum Major Mickey Mouse, Walt Disney World Ambassador Raevon Redding and Disney on the Yard executives were on hand at ESPN Wide World of Sports Complex for the celebratory moment.

Led by Drum Major Mickey Mouse, who showed off his own cool dance moves in his signature marching band uniform, each marching band showcased all the elements that make an HBCU band so unique – precision marching mechanics, high-energy dance moves, regal drum majors and the unmistakable sounds of chart-topping R&B music.

Things really amped up when the marching bands took to the field at ESPN Wide World of Sports Complex for the spirited Battle of the Bands. The winners of this friendly rivalry were the spectators who cheerfully moved to grooves of the latest dance tunes from each band!

Disney’s involvement in HBCU Week is part of a relationship between the HBCU Week Foundation and Disney on the Yard, an initiative focused on deepening Disney’s engagement with HBCUs. By working more closely with HBCUs, Disney aims to continue hiring talented Black employees through the development of student internships, mentorship opportunities, career and employee spotlights, scholarships and more.