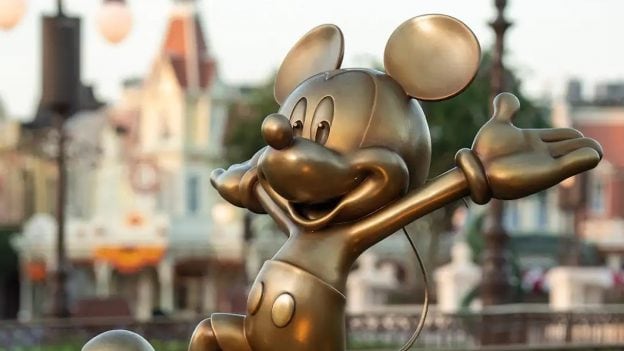 Mickey Mouse: It’s a ‘Golden Age’ Wherever He May Be!

As The World’s Most Magical Celebration continues at Walt Disney World Resort, diligent fun-seekers have delighted in discovering the locations of the “Disney Fab 50 Character Collection.” There is one character statue that no one has to hunt for, though; front and center in the heart of the Magic Kingdom Park is Mickey Mouse, waving merrily from the Plaza Hub. Mickey’s golden glow is appropriate for the season, as Oct. 3rd marked a major milestone in his career: the day he brought his unique mousekemagic to the golden age of television.

Walt Disney’s “Mickey Mouse Club” was a revolutionary series, an original fusion of variety, information and entertainment aimed towards youngsters, but engaging for the entire family. Walt had already partnered successfully with the ABC network to bring the weekly “Disneyland” anthology series to the evening airwaves, a deal which provided funding for the construction of his new Anaheim theme park. The “Mickey Mouse Club” was also part of that agreement, but in this case, the hour-long program was five days per week—a challenge that mobilized the Disney creative team as never before.

Producer Bill Walsh coordinated the overall effort and was particularly well-suited to creating a show celebrating Mickey since he had himself written the Mickey Mouse newspaper comics since 1943 (and continued to do so until he became too busy as co-writer/producer of “Mary Poppins”). Animator Bill Justice, who would direct the show’s animated opening sequence, brought his tennis partner, an actor/songwriter named Jimmie Dodd, to Walsh’s attention, and Jimmie not only became a prolific content contributor to the project but became the beloved on-camera leader of the program. Jimmie was paired with Disney veteran Roy Williams, a burly gag writer and cartoonist extraordinaire, both creatively and in performance. Musician Buddy Baker took on the majority of the melodic coordination, including conducting his orchestra live on the soundstage during filming. All these top talents, now Disney Legends, poured their considerable entertainment expertise into the new frontier of television.

Casting the young stars of the show around whom most of the activities would revolve was pivotal, and Walt directed that the team search for kids that others just naturally gravitated to—the playground leaders, everyone’s friend. A group of 24 youngsters, dubbed Mouseketeers, were selected after exhaustive auditions, many with entertainment resumes already, though certainly not all. The new stars received shirts with their names written across them, as well as distinctive beanie-style hats, their “Mouseketeer ears,” inspired by a sight gag Roy Williams remembered from the 1929 Mickey cartoon, “The Karnival Kid.” In that film, mannerly Mickey “tips his hat” to Minnie–though his “hat” was actually the entire top of his head!

The Mouseketeers’ first public sighting was during the July 17, 1955 opening festivities for Disneyland in Anaheim, though no one knew what to make of the enthusiastic group. That all changed soon when on Oct. 3rd, a trumpet fanfare called the first meeting of the “Mickey Mouse Club” to order, and a nation learned how to spell along with the bouncy march theme written by Jimmie Dodd.

Soon the Mouseketeers were bonafide TV stars, and their daily roll calls became more a tradition than a necessity. Darlene, Karen, Cubby, Bobby, Doreen, Tommy, Sharon, Lonnie, Cheryl, Judy, Johnny, Sherry, Paul … and of course, Annette, were the talented playmates kids rushed home to see after school. They were many viewers’ first crushes, and inspirations to other gifted performers—some of whom auditioned for the show’s later seasons and earned their own “ears.”

The Mouseketeers’ portion of the program was assigned a daily theme, along with a catchy opening number. Monday was Fun With Music Day, which often featured the singing of Darlene Gillespie and Tommy Cole. Their season one duet, “I Am Not Now and Never Have Been in Love,” was recorded as a single—which was produced by Quincy Jones! There were simple sing-alongs like “The Friendly Farmer” and “The Pencil Song,” and elaborate production numbers, often with an international flair. In “Switzerland,” guest Roberta Shore (a future star of “The Shaggy Dog“) taught the Mouseketeers to yodel, and in “Paris,” ballerina Annette Funicello performed a charming pas de deux with standout dancer Bobby Burgess. As the young stars grew, choreography and staging reflected their increased abilities. Storytelling routines such as “Basketball Ballet” were created, in which music and dance solve the problem of which group gets to use the school gym.

Tuesday was Guest Star Day, and the Mouseketeers met faces both familiar and new. The first guest was Golden Horseshoe Revue comedian (and Disney Legend) Wally Boag. Disney animation came to life as model Helene Stanley (Cinderella and Princess Aurora) came to call, and the gentlemen behind the voices of Jiminy Cricket, Donald Duck and José Carioca (Cliff Edwards, Clarence Nash and José Oliveira) led the Mouseketeers in song (and quacks). Skating stars Donna Atwood and Olympic medalist Ronnie Robertson appeared thanks to Walt’ friendly relationship with the Ice Capades, and film stars like Judy Canova, Leo Carrillo and Carol Lynley added to the mix.

No one knew what Wednesday would bring–it was Anything Can Happen Day! There was a dramatization of the history of drums featuring percussionist Cubby O’Brien, and a session with Roy Williams (affectionately dubbed “The Big Mooseketeer”) teaching quick-sketch skills by drawing Disney characters. Noted “Look” magazine Earl Theisen led excursions to explore “Fun With A Camera,” and the Los Angeles Fire Department invited a mousekecontingent to become rookie firefighters. A favorite Wednesday feature involved taking literal flights of fancy aboard unusual vehicles. Thanks to a rear projection screen, giggling Mouseketeers flew all over the world with some familiar Disneyland attraction components including a Fantasyland tea cup, a roadster from Mr. Toad’s Wild Ride, and an Adventureland rhinoceros!

Walt Disney grew up loving the circus, so Thursday became Circus Day. Cheering grandstands of Mouseketeers were entertained by trained animals, jugglers, acrobats and puppets–and sometimes got into the act themselves! From the first season, the Ted DeWayne Troupe, Professor George Keller and his Feline Fantastics, and Serenado, the Musical Horse joined the Mouseketeers to appear in person in the spectacular Mickey Mouse Club Circus, presented at Disneyland during its first Christmas holidays.

Many viewers found Fridays to be their favorite mousekeday of all. Western-themed Talent Round-Up Day featured distinctive young performers, several of whom had been discovered during the original Mouseketeer auditions. Table tennis, archery and yo-yo champions were presented alongside baton twirlers, accordionists, vibraphonists and a theremin virtuoso. Established stars like the Lennon Sisters also appeared, and Davy Crockett himself, Fess Parker, was made an Honorary Mouseketeer (as was his co-star Buddy Ebsen).

Today, Walt Disney World Resort, The Most Magical Place On Earth, is a destination enjoyed by one and all. In 1955 however, the most magical place anywhere for most children was their living room, where the still-new innovation of television could whisk them instantly to any corner of the globe. That was the point of another segment, The Mickey Mouse Newsreel. Dedicated to “YOU, The Leaders of the Twenty-First Century,” the multiple fast-paced stories were designed to inspire curiosity about the people and places of the world. There was a California girl who built a solar-powered heater with mirrors and a Christmas tree stand, a trip to a 17-foot-tall cuckoo clock in Germany, homing pigeons being trained in Illinois and coverage of the New Jersey marbles competition. Young people headlined festival parades in Japan, learned to make shoes from a Danish cobbler and encountered 12-foot-long worms in Australia. A Stanford University professor explained the art of the Tibetan Ghost Trap … and an English girl took her Shetland pony to the movies for its 4th birthday.

“Animal Autobiographies,” extended travelogues, previews of upcoming Disney films and the very popular episodic serials like “Spin and Marty,” “The Hardy Boys” and “Corky and White Shadow” filled the rest of the hour, which traditionally closed with a helpful word, musical mousekethought or fable from Jimmie Dodd. His good humor and genuine friendliness played a major role in the success of the “Mickey Mouse Club,” and he was as loved by his co-stars as he was by his millions of unseen television friends.

There was one, all-important additional segment to the program: the Mousekartoon! This was, after, the “Mickey Mouse Club—” in fact, Mickey greeted viewers daily in themed animated “bumpers” (with Walt Disney himself once again speaking for his life-long collaborator). However, the Mousekartoons introduced the Mickey, Minnie, Donald, Goofy and Pluto that their parents had grown up seeing in movie houses, even as far back as the “Steamboat Willie” days of 1928. A new generation had the chance to meet Mickey in his impish youth, and as a result, fell in love once again with a broader sense of all things mouse.

As the curtains closed on each day’s visit with the Mouseketeers, the Alma Mater would be sung, and Jimmie Dodd’s declaration to those at home that they’d all “see you real soon” was very much a promise, not a song lyric. Through the years, the Mouseketeers did indeed stay friends not only with each other but with their extended global mousekefamily. A lavish 1980 reunion special aired on “The Wonderful World of Disney” for the club’s 25th anniversary, and there have been stage shows, events and parades saluting “the mice” (as they’re sometimes called) across the Disney Parks. In 2015, it was standing room only when the Mouseketeers reunited for a spectacular evening of music and memories at the finale of the D23 Expo in Anaheim. Smiles were wide and eyes were moist as the entire hall joined in for one last heartfelt singing of “M – O – U – S – E,” celebrating the legacy of family and friendship brought about not only by Walt Disney and his superb creative team but by the leader of the club, Mickey himself.

Why? Because we love him!