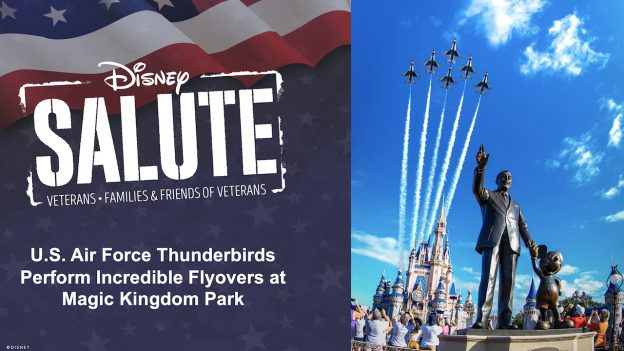 We were honored to kick off National Veterans and Military Families Month a few days early in a very big way by hosting a flyover of Magic Kingdom Park by the U.S. Air Force Thunderbirds air demonstration team today. It was an inspiring moment to witness as the Air Force’s premier aviators soared 500 feet over Cinderella Castle and down over Main Street, U.S.A. thrilling guests and cast members alike.

The Thunderbirds performed precision aerial maneuvers and they showed us their world-famous delta break maneuver where they passed over Cinderella Castle accelerating rapidly and in different directions giving us a fantastic display of acrobatic flying precision.

The flyover is particularly special this time around because the pilot flying the #4 jet, U.S. Air Force Maj. Zane Taylor, is the son of a retired Disney executive and grew up around Walt Disney World. He often dreamed of flying over Magic Kingdom in his F-16 Fighting Falcon. He was excited to make that dream a reality during his second to last away show of the season before he moves on to his next assignment in the Air Force.

“I spent my childhood watching the amazing live shows at Walt Disney World with my family,” said Taylor. “Who knew that exposure would serve me so well when I was tasked with building the new Thunderbird show in 2020.”

The Thunderbirds are in town through the weekend for the Orlando Air and Space Show, but made time fly over Magic Kingdom Park in celebration of Walt Disney World’s 50th anniversary and the U.S. Air Force’s 75th.

Disney’s support for the Armed Forces is part of our company’s heritage and we would like to give a big Disney SALUTE to all who proudly serve the nation in uniform and their families!