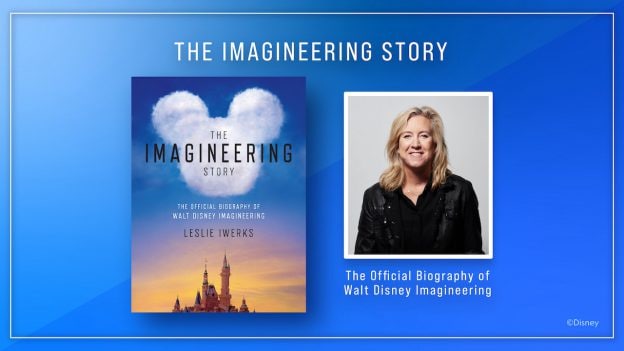 In November 2019, The Imagineering Story, a six-part docuseries, premiered on Disney+. To create her ambitious documentary series, acclaimed filmmaker Leslie Iwerks, granddaughter of the award-winning Disney animator and Disney Legend Ub Iwerks and the daughter of celebrated Disney Legend Don Iwerks, was granted unprecedented access to archival documents, firsthand insights, and never-before-shared Imagineering projects. Now, Leslie collects some of the most astonishing insider stories and expands on details that did not make it into the series. Disney Publishing was afforded the privilege of discussing her experiences with the project!

I loved when Imagineers Charita Carter and Kevin Rafferty gave me a sneak peek of Mickey and Minnie’s Runaway Railway. They were excited to surprise me because at one point on the runaway train, we turned a corner, and much to my surprise was a sign that read “Iwerks Waterworks,” a nod to my grandfather and father which is really special. I love that the Imagineers continue to celebrate their heritage with creative nods like that. Additionally, my numerous trips to Shanghai Disneyland were really fun. Especially when Scot Drake gave me a walk-through tour of the new TRON Lightcycle Power Run attraction and invited me to be one of the first ‘outside’ people to ride it, along with him. It was amazing—the lighting, the placemaking, the audio, the design of the vehicle itself, everything was at such a high bar.

I encountered so many unexpected and exciting things while filming in the parks. One of my favorite experiences was strolling through Disneyland with Kim Irvine and seeing the way she cares for the parks in the same way I know Walt and John Hench did. Kim teaches and inspires the next generation of Imagineers today, just as John taught her, so it was really special to see how important it is to her, in every detail. Kim also took me behind the scenes in the Haunted Mansion, and seeing the original and rather ‘simple’ original technical processes and equipment was incredibly illuminating. Standing with Kim inside the dining room scene gave me such a unique perspective to the dancing ghosts, and we were able to discuss her rich family history with her mother as the inspiration for Madame Leota’s floating head. Another great highlight was walking through the Pirates of the Caribbean ride after hours, seeing the sets, the cellophane flames and Audio-Animatronics figures up close and personal, and especially interviewing Marty Sklar in the attraction before the park opened. That was a special moment.

My first trip to Shanghai was my first time in the city, and I was greeted with open arms by the Imagineers from the first day I arrived. When I arrived at Shanghai Disneyland, the sight was all dirt, and it was fascinating to see how much of the creative work was being done backstage. The Shanghai Disneyland castle is the largest Disney castle, so I knew their approach to building it was going to be unique. I had the opportunity to see the early three-dimensional designs and color and texture swatches for the castle from lead Imagineer Ali Rubinstein and of course it was inspiring to see the female led team designing Fantasyland. I was in awe seeing Doris Hardoon inspect the tiniest shards of glass for the grand mural in the Gardens of Imagination while handling the big picture macro decisions for the whole resort.

We chose to shape the book in chronological order, from the origin story through today because it is truly a story of evolution, in the same way we chose to order the docuseries. Every generation of Imagineers is standing on the shoulders of the Imagineers who came before them, and The Imagineering Story chronicles the lessons learned throughout the years, and the ongoing advancement of technology by means of storytelling. The beauty of the docuseries is that we were able to include imagery, visuals, music, and heartfelt tears from the Imagineers as they shared their history with us. We approached the book by first laying out all the bites that we loved and all the bites that never made it in the show, and ordered them in a way that would tell the enhanced story in greater detail. We were also able to utilize never-before-seen archival material, from past company brochures, financial reports, creative pitch decks, press releases, you name it.

The Imagineering Story: The Official Biography of Walt Disney Imagineering is available now, wherever books are sold!