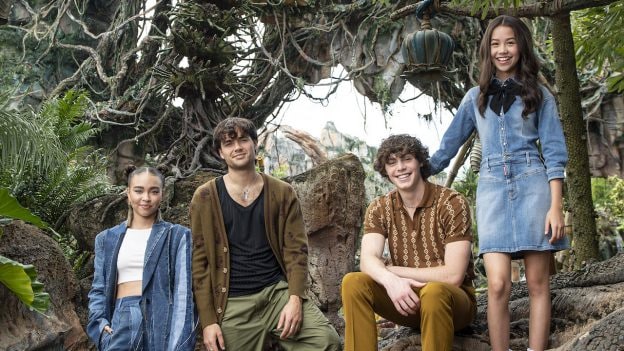 ‘Avatar: The Way of Water’ Cast Returns to Pandora at Disney’s Animal Kingdom

It’s almost time to dive back into the world of Pandora when “Avatar: The Way of Water” debuts in theaters nationwide on Dec. 16. Ahead of this much-anticipated sequel to the original blockbuster film, young actors from the movie recently made a return visit to Pandora – The World of Avatar at Disney’s Animal Kingdom Theme Park.

When Jamie Flatters, Trinity Bliss, Jack Champion and Bailey Bass first stepped foot in this mythical world back in 2017, they had just been cast in the sequels. Exploring the wonders of Pandora – The World of Avatar was the perfect way to get immersed in the sights, sounds and experiences inspired by the movie. It was crucial to getting prepared for their new roles.

“Being here on Pandora really helps make the world tangible in my mind,” said Trinity. “I got to really feel that connection and harmony of Pandora, the magicalness of this world, and bring it into my performance for the film.”

“Flight of Passage feels a lot like our training when we were on set,” Bailey said. “The fact that audiences can experience becoming linked with a Na’vi like we experienced when we were doing training for months is extremely immersive. That’s why we came years ago to Pandora: to see the world and to be more connected with the Na’vi.”

Now, they’re excited to share the next chapter of the story with audiences around the world.

Set more than a decade after the events of the first film, “Avatar: The Way of Water” begins to tell the story of the Sully family (Jake, Neytiri, and their kids), the trouble that follows them, the lengths they go to keep each other safe and the battles they fight to stay alive.

Pandora – The World of Avatar at Disney’s Animal Kingdom is the only place you can experience this visually stunning world for yourself – from flying on the back of a banshee in Avatar Flight of Passage to floating through a bioluminescent rainforest on Na’vi River Journey.

“There are Easter eggs in Flight of Passage,” Bailey said. “There are a bunch of ilus in the water that I didn’t realize when I was on it the first time. I’m so happy that people got a taste of ‘Avatar: The Way of Water’ even before it came to theaters.”

“The floating mountains are my personal favorite, and the waterfalls and the little ponds,” Jack said. “There’s something special about this park, and even after the movies have long existed, this will still be here and give people the magic of Pandora.”

Check out the video below to watch the cast’s latest adventures in Pandora – The World of Avatar.