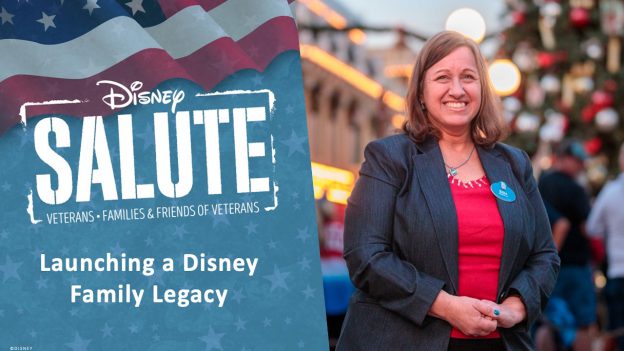 “There’s always been a little bit of Disney in my family, and it started with my grandpa,” Julia said of her grandfather, John Surak, who served in the U.S. Marine Corps from 1942 to 1945 and earned a Purple Heart in Okinawa.

“He had a lot of pride in our country because of the freedom and ability to exercise our own will,” said Julia.

After his service, John and his family moved to California, where, as an aerospace engineer, John volunteered to help build the iconic standing rocket in front of the Rocket to the Moon opening day attraction in Tomorrowland. “He believed in the space program and [wanted] to inspire other people with their dreams to go different places,” Julia said.

To thank him for his work on the project, John and his family were even invited to attend opening day at Disneyland Park in 1955.

When Julia was hired to work at the Disneyland Resort in 1996 her grandfather was thrilled. “He was so excited that I work [for Disney] because it continued the legacy that he had a piece in from the very beginning,” said Julia.

John passed in 2009, but in addition to inspiring Julia’s Disney career, his military service inspired her to serve as a volunteer chaplain for the Riverside Police Department. Julia completed courses through Shield of Faith Ministries to become a chaplain and provides emotional support to 911 dispatchers. “It is my way of giving back to my community and being a part of something greater than myself,” she said.

Julia is also a member of the Disneyland Resort SALUTE Business Employee Resource Group (BERG) dedicated to enhancing the Disney experience for those who have served in uniform and the families and friends who support them, and she was on hand for the special Flag Retreat Ceremony on Veterans Day. As part of National Veterans and Military Families Month, the resort honored veteran and active-duty cast members both at the ceremony and a reception afterward.

“It’s because of [veterans] that we have freedom, and it’s not just the veterans that are the ones sacrificing their time, it’s their families as well,” said Julia. “It’s a wonderful gesture to those families to let them know that we appreciate them and their service.”