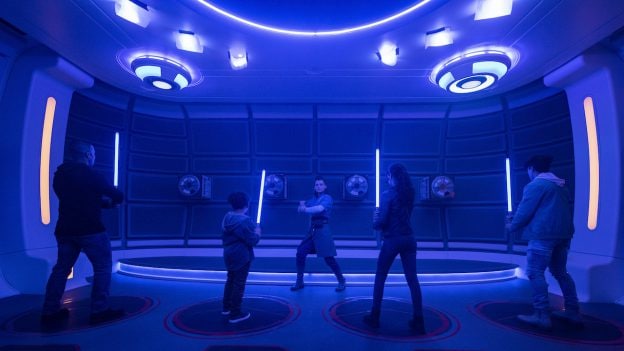 This week, at the International Association of Amusement Parks and Attractions (IAAPA) Expo, the Themed Entertainment Association (TEA) announced that Disney Parks, Experiences and Products will be presented three prestigious Thea Awards in 2023. Internationally recognized, the Thea Awards represent the excellence found throughout the themed entertainment industry.

Additionally, IAAPA announced that Disney Parks, Experiences and Products is the recipient of nine Brass Ring Awards for Live Entertainment Excellence, Games and Merchandise Excellence and Food & Beverage Excellence. The Brass Ring Awards recognize global innovation and the unwavering spirit of the industry.

“I’m so proud of our teams who continue to delight our guests and consumers by pushing industry boundaries,” said Josh D’Amaro, chairman, Disney Parks, Experiences and Products. “These accolades illustrate our legacy of innovation, as evidenced by projects that opened 50 years apart being awarded together.”

The revolutionary vacation experience, Star Wars: Galactic Starcruiser, was recognized with a Thea Award for Outstanding Achievement. It’s the most immersive Star Wars experience ever created with the integration of physical, digital and live entertainment elements into one cohesive story that plays out over the course of multiple days and nights.

More news from the IAAPA Expo is that Tokyo DisneySea is the recipient of the Liseberg Applause Award, which recognizes outstanding theme parks worldwide. Magic Kingdom Park was the historic first recipient, making Disney theme parks the first and latest honorees.

Recognizing her innovative spirit and multiple accomplishments in the field, Disney Live Entertainment Creative Director Susana Tubert will receive the Thea Catalyst Award, reserved for an individual who has achieved a real and positive impact on the culture of our industry.

Based at the Disneyland Resort, Susana is a multi-faceted creative leader who inspires artistic risk-taking with an emphasis on story and relevancy. She has contributed her talent, leadership and experience to the development of beloved shows including the recently opened “Tale of the Lion King,” the dazzling new grand finale of the “Main Street Electrical Parade,” the emotional multimedia and fireworks show “Together Forever – A Pixar Nighttime Spectacular,” and other highly successful and immersive cultural celebrations and events, such as Disney Festival of Holidays, “Disney ¡Viva Navidad!,” Lunar New Year Celebration, Plaza de la Familia, Pixar Fest, and “Pop-Up Disney! A Mickey Celebration.” Susana also was a creative contributor to the recent updates to the Jungle Cruise attraction.

“I would like to thank TEA and IAAPA for these amazing recognitions—and most importantly, for their steadfast dedication to advancing our industry and keeping us connected globally,” said Barbara Bouza, president, Walt Disney Imagineering. “As our Imagineering and Live Entertainment teams continue to deliver magic and inspire humanity, it’s an honor to be recognized by our colleagues and friends around the world. I’d also like to give a special shout-out to this year’s Thea Catalyst Award recipient, Susana Tubert, who continues to be an influential and inspiring leader.”

“This year’s Brass Ring and Thea Awards truly speak to the power of live entertainment and the consistent quality of work of the team I have the privilege to lead,” said David Lightbody, senior vice president, Disney Live Entertainment. “We are honored and grateful to receive these industry recognitions.”

For Games and Merchandise Excellence, and Food & Beverage Excellence, the following products received Brass Ring Awards in these categories:

Congratulations to all Thea Award and Brass Ring Award recipients!