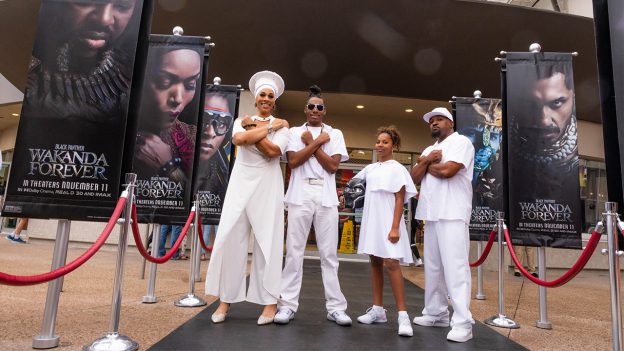 Hundreds of Disney Parks fans returned to Wakanda in an unforgettable way as they joined us for a special viewing celebration of the blockbuster film “Black Panther: Wakanda Forever” at the AMC theaters in Disney Springs. The opening-night event, created especially for fans, featured amazing Black Panther-inspired costumes, special guests, Super Hero stories and a few surprises!

From the moment fans arrived at Disney Springs, exclusive “Black Panther: Wakanda Forever” experiences were on display with photo opportunities inside and outside of the theaters.

Special guest host Adriana Redding (@bibbidibobbidi_broke) kicked off the night’s festivities for Disney Parks fans with an audience-judged costume contest in front of the big screen.

Also joining Adriana on stage, New York Times best-selling Frederick Joseph and New York Times best-selling illustrator Nikkolas Smith shared an inside look at their new book “Black Panther:Wakanda Forever – The Courage to Dream.” Both offered inspiring stories and insights into the inspiration behind the pages and everyone in attendance received signed books as part of the celebration.

In “Black Panther: Wakanda Forever,” the leaders of Wakanda fight to protect their nation from intervening world powers in the wake of King T’Challa’s death. As the Wakandans strive to embrace their next chapter, the heroes must forge a new path for their beloved kingdom. And Disney Parks fans said they enjoyed every minute of the film.

A special thank you to everyone who attended our special Disney Parks fan event at Disney Springs. If you weren’t able to join us to see “Black Panther: Wakanda Forever,” the film is now in theaters. For more information, visit the film’s site now.

And if you joined us for the celebration, please let us know what you thought using hashtag #WakandaForever or in the comments below.