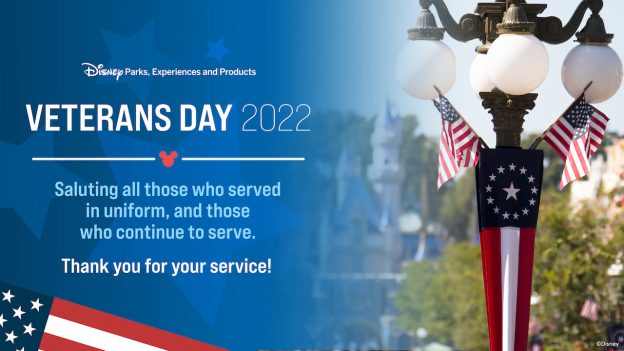 Today, we celebrate Veterans Day—a holiday that honors the countless heroes who selflessly served in the U.S. Armed Forces. Disney’s enduring support and respect for military service dates back to the very founding of our company 100 years ago and started with our founders Walt and Roy O. Disney’s own contribution during the first World War. While today is a special day, Disney is honored to salute those who serve in uniform and the military families who support them in many ways all year round.

Our daily flag retreat ceremonies at both Walt Disney World Resort and Disneyland Resort are just one way we recognize military heroes. These are always memorable moments, but some of the flag retreats we hosted this year were extra special. These included everything from Magic Kingdom recognizing a World War II veteran who played a role in the historic D-Day operation in Normandy in 1944 to Disneyland honoring fallen Marine, Lance Cpl. Dylan Ryan Merola, who gave his life while protecting the security of others at Kabul International Airport in Afghanistan.

His valor and sacrifice were recognized with the presentation of the Navy Achievement Medal, presented to his family during the ceremony.

In February, Disney Publishing and Disney Cruise Line collaborated with Blue Star Families– a nonprofit for and by military families – to host the 20th “Blue Star Books” event at U.S. Coast Guard Air Station in Opa-Locka, Fla. as part of the Blue Star Books program to encourage reading among military children.

In August we were honored to host hundreds of elite military athletes from the U.S. and allied nations at the 2022 Department of Defense Warrior Games. This inspiring event celebrated the resiliency and dedication of wounded, ill, and injured active duty and veteran U.S. military service members as they competed in a variety of adaptive sporting competitions.

The Walt Disney Company is also proud to celebrate the 10th anniversary of our Heroes Work Here program, which has seen us hire more than 12,500 veterans since we established it in 2012. We’ve learned a lot since we kicked off this important initiative and were thrilled to welcome the return of the Veterans Institute Summit, presented by Disney Institute and Wounded Warrior Project on Aug. 19-20, 2022. During this 2-day complimentary summit, we shared our learnings with other organizations interested in developing or enhancing their veteran-hiring programs. We are thrilled to announce that anyone can now register for complimentary access to view an On-Demand Replay of the Veterans Institute Summit on the Disney Institute webpage.

We also celebrate service through music and our cast and guests enjoyed performances from several military bands throughout the year. Walt Disney World hosted groups such as the U.S. Air Force “Airmen of Note” jazz band and the West Point Glee Club at Disney Springs.

Disneyland hosted such talents as the California Army National Guard 40th Infantry Division Band from Los Alamitos, CA and the 1st Division Marine Band from Camp Pendleton in San Diego, CA over the Fourth of July weekend. Look for the “Airmen of Note” to perform this month at Disneyland Park on Nov. 18!

Most recently we kicked off this year’s National Veterans and Military Families Month in a very big way with a flyover of Magic Kingdom Park by the U.S. Air Force Thunderbirds air demonstration team on Oct. 27, 2022. It was an inspiring sight to behold as guests and cast members alike looked to the skies over the park in celebration and gratitude of those who serve our country.

Our cast members with military service are an essential part of our Disney family and contribute immeasurably in supporting our company’s mission of creating unparalleled family entertainment. We’re honored to celebrate them in a big way with special Flag Retreat ceremonies at both Magic Kingdom and Disneyland.

From all of us at Disney, we offer a hearty salute and our gratitude to all those who have raised their right hand to serve our country in the military and for the incredible military family members who support them.