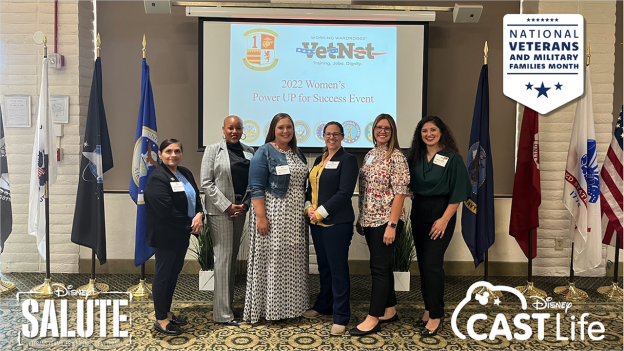 In partnership with the nonprofit Working Wardrobes, cast members from the SALUTE and Women’s Inclusion Network Business Employee Resource Groups (BERGs) assisted Marines and sailors with selecting suits, shoes and accessories before each woman took a professional headshot. As part of National Veterans and Military Families Month, the event also featured veteran panelists, including Labor Relations Senior Manager, Bri Foster, who spoke about her journey from serving in the military to becoming an industry professional.

For Jeanne Costello, area manager for Operational Costuming, this opportunity to help women find the right professional attire was right up her alley. “When you see the looks on women’s faces when they see themselves, it is as powerful an experience for those who are standing behind the mirror as those who are standing in front of it,” said Jeanne.

Santa Ana-based Working Wardrobes is a workforce and career readiness organization that provides services and soft skill training for veterans and their families and others in need.

“It’s all about those who are serving in our community; it’s not about us,” said Michael Barrett, director of Client Services at Working Wardrobes. “The team from Disney has made an impact, tenfold.”

As a retired U.S. Marine and Purple Heart recipient, Michael utilizes the leadership skills he learned during his 21 years of service in his work with Working Wardrobes.

“Militarily speaking, [Disney and Working Wardrobes] are in lockstep; we’re marching together in line, synced with the values and mission Disney brings to the table,” Michael said.

Disneyland Resort Senior Security Manager Kim Sims attended the event at the military base in Oceanside as a leader of SALUTE, a BERG committed to enhancing the Disney experience for those who have sacrificed in support of the military.  “Knowing that our company supports our military service members and families is huge,” said Kim. “Our cast members have such huge hearts and special talents and those need to be shared within and outside of our resort.”

Although the Disney VoluntEARS went to share their skills and experiences, they were able to gain insight and knowledge from the women they were helping as well. “You gain a different perspective when you put yourself in someone else’s shoes,” said Jeanne. “I’m not in the military so I was learning as much from them as they were from me.”